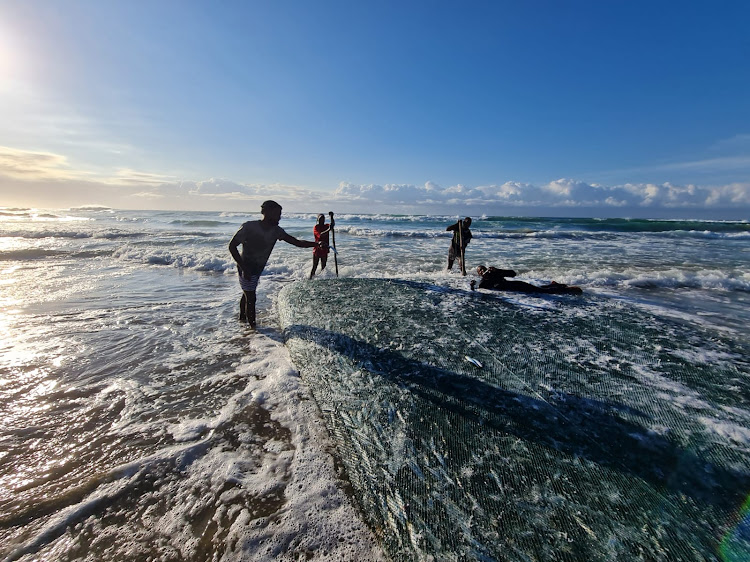 Thousands of sardines were netted at Port Edward on Monday.
Image: Supplied

Thousands of sardines have been netted in Port Edward, on the KwaZulu-Natal south coast, as fishermen scurried to the beach to witness the action on Monday morning.

Sardines have arrived in KZN.. Confirmed pics and report from the deep south of Port Edward courtesy of Clyde Filer @...

“There was one successful net, of approximately 150 crates, selling at R1,500 a crate. There were other nets laid but they were unsuccessful. There were signs of other pockets of sardines seen heading north off Port Edward and Glenmore Beach, close behind the backline,” he said.

Thompson said there was a possibility that the fish may head towards the Ramsgate and Margate area within the next day or two.

“Shark nets have been removed, drumlines neutralised and bathing banned from Port Edward to Umtentweni.”

Small pilot shoals of sardines have been spotted off the Eastern Cape, with the silvery fish expected to arrive in KwaZulu-Natal waters between June ...
News
1 year ago

IPSS Medical Rescue said the man was about to reel in his catch when a wave knocked him off the rocks and swept him into the sea.
News
1 year ago

After months of social distancing, freedriver Beth Neale enjoyed being “a part of the crowd”, even if it was with sardines.
News
1 year ago