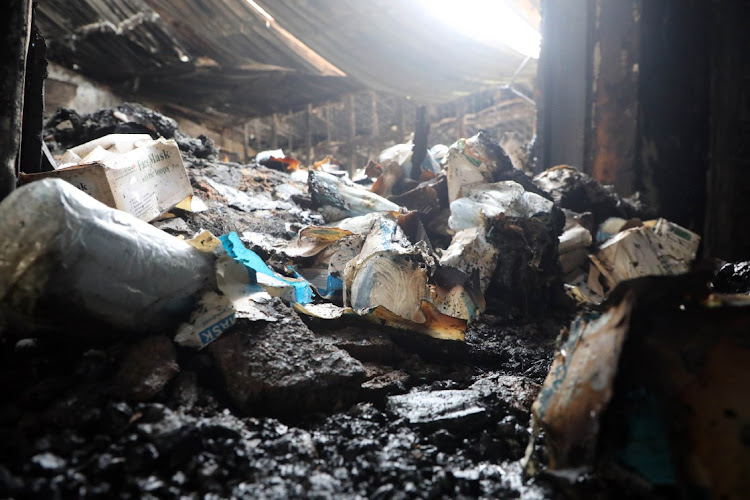 A storage area in a building outside the main hospital in Carletonville on the West Rand caught fire on February 4 this year.
Image: ANTONIO MUCHAVE/Sowetan

The fire that destroyed R20m worth of equipment in a storeroom at the Carletonville Hospital in February this year was caused by arson.

This is according to the findings of a fire brigade investigation. The findings were revealed by Gauteng health MEC Nomathemba Mokgethi in response to questions by DA Gauteng shadow health MEC Jack Bloom in the Gauteng Legislature.

Personal protective equipment (PPE) and other medical equipment estimated to be worth over R20m were destroyed in the fire.

The blaze, which started in the early hours of February 4 , took about three hours to extinguish t. No-one was injured.

Bloom said according to a fire forensic report, there were traces of an accelerant in between the equipment in the storeroom, which indicates that arson was the cause of the fire.

“It was also noted that no member of the public had access to the hospital due to Covid-19 restrictions, which infers that the fire was started by an official within the hospital premises,” Bloom said.

He said a criminal case of arson has been opened, but police are still investigating and no-one has yet been arrested.

Bloom said there are indications that the fire at the Charlotte Maxeke Johannesburg Hospital may also have been to destroy the evidence of corruption at the stores.

“The enormous losses and disruption of hospital activities because of these fires causes extra suffering to sick patients. It is vitally important that fire prevention measures are upgraded at all hospitals, and perpetrators of arson should be apprehended and brought to justice,” he said.

A building at the Carletonville Hospital caught fire on Thursday, resulting in significant destruction of items inside - including personal ...
News
11 months ago

“I am impressed with what I have seen. It is a good investment. Clearly this place has been well upgraded with all the necessary capacity to supply ...
News
6 months ago

Gauteng premier David Makhura announced on Thursday that some blocks at Charlotte Maxeke Hospital which were untouched by a recent fire will reopen.
News
7 months ago