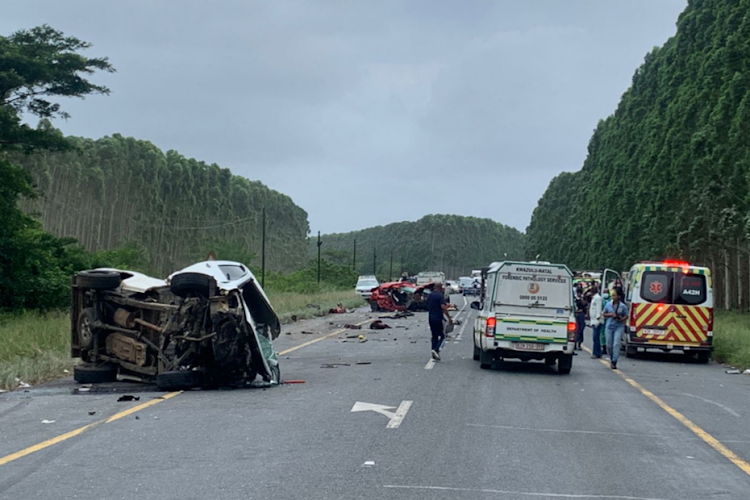 The aftermath of the crash which claimed five lives in KwaZulu-Natal.
Image: Supplied

Four family members on their way to a wedding were killed on the N2 highway near Mposa in northern KwaZulu-Natal in a horrific crash early on Thursday.

A woman in a separate vehicle also died, bringing the death toll to five, while one person was critically injured and two others sustained moderate injuries.

Sources familiar with the scene said the crash happened shortly after 6am and involved three vehicles, including a truck which overturned.

“A bakkie lost control and the truck attempted to avoid it but collided with an SUV in which five occupants from the same family had been travelling.”

The family were en route to Hlabisa to attend a wedding.

One of the SUV occupants survived the crash and was fighting for her life at the Netcare Bay Hospital in Richards Bay, while the two occupants of the bakkie were taken to Ngwelezana Hospital near Empangeni.

The scene was cleared at 9am and traffic is flowing again.

Four people were killed and 28 others injured when a bus and a truck crashed in Jacobs, south of Durban, on Wednesday afternoon.
News
7 months ago

Two men are expected to appear in the Richmond magistrate’s court on Tuesday morning after a KwaZulu-Natal family of five - including a two-year-old ...
News
7 months ago

Seventeen people were injured on Sunday morning in a minibus crash on the M35 near KwaMakhutha southwest of Durban, KwaZulu-Natal.
News
7 months ago

Ahead of the festive season rush, the Road Accident Fund has reminded South Africans of the most dangerous roads in the country.
News
8 months ago