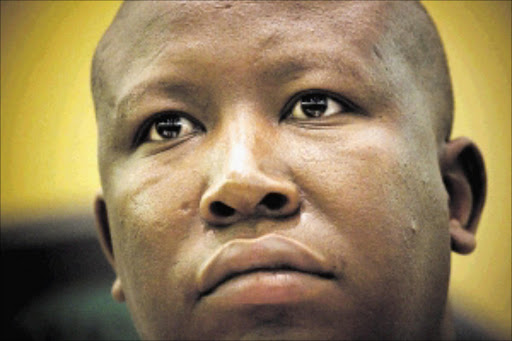 "The singing of the song by Malema constituted hate speech," said Lamont.

The words undermined the dignity of people and were discriminatory and harmful.

"No justification exist allowing the words to be sung... the words were in any event not sung on a justifiable occasion."

Lamont said it was not relevant whether the words were not exposed to some people of society.

"If it is exposed to a portion of society then it is relevant."

Words are powerful weapons that could lead to disastrous actions and even genocide, Judge Collin Lamont said on Monday.

"The words of one person inciting others...that's how a genocide can start," he said in handing down judgment in a hate speech case against ANC Youth League president Julius Malema.

Lamont said in determining the outcome of this case the court had to analyse the meaning of the words in the "shoot the boer" song, and its effect on society.

Single words and a group of words had "elastic meanings". The words Malema sang had not been forgotten as they were derogatory and hurtful.

He said the response of the public was relevant to check the entirety of its context.

Genocide was defined as "the deliberate and systematic destruction" of an ethnic, religious, or national group.

Lamont likened the songs by Malema as those sung by soldiers when they were at war.

"Soldiers in battle don't treat the enemy as individuals but as a thing [a unit]."

Lamont said the difference was that soldiers were singing to celebrate.

A video of Malema singing "shoot the boer" was shown during his hearing.

"He executed rhythmic movement... making the shape of a firearm... and certain gestures were made," said Lamont.

An armed person was one in power and one who intimidated, the court found.

Racial discrimination of one group or community over another could not be justified, and certain groups did not enjoy "superior status" over others in a democracy.

Since apartheid, transformation had been difficult for some in South Africa.

"Certain members [of the public] embrace the new society, others found it hard to adjust... it will continue for some time. There can be no transformation without pain," said Lamont.

The court heard that the Constitution provided for equality, and the eradication of social and economic inequalities.

South Africa had international obligations under the United Nations for peace and unity including the elimination of all forms of racial discrimination, and discrimination against women.

Lamont traced South Africa's history from the period before settlers started arriving in South Africa, through the years of white minority dominance.

He described it as a case of "social conflict" and launched into a long explanation on the context, background and history of the struggle against apartheid.

He said the apartheid system left wounded memories to the survivors, and described democracy as a "negotiated transition".

Certain aspects of the past may "never be fully reversed", but reconciliation and national unity were meant to heal the divisions of the past.

The African National Congress consisted of the "suppressed majority" of apartheid.

Malema was not in court, even though his disciplinary hearing before the ANC was put on hold for Monday to allow him to attend proceedings.

Outside court, a small group gathered to show their support for Malema. "We will follow Malema anywhere," one of them said.

But in contrast to the usual rousing singing and sea of supporters, the pavement was starkly empty.

A police officer said there had been no application for a gathering permit but police had prepared for a "spontaneous gathering".

AfriForum Youth, which is part of the rights lobby group AfriForum, opened a civil case against Malema in the Equality Court after he sang the words "dubhula ibhunu", which translate to "shoot the boer", at a number of ANC Youth League gatherings last year.

It believed the words were threatening to minorities, a threat to the safety of Afrikaners and farmers, and that the phrase was hate speech.

Malema and a host of ANC witnesses disagreed saying it was part of the party's history and should not be taken literally.

Malema and five other seniors in the league are in the midst of an ANC disciplinary hearing over comments they had made that the party believed was bringing it into disrepute.

At the opening of the disciplinary hearing, groups claiming to be Malema supporters threw stones and bottles in the Johannesburg CBD and harassed media.