SACP congress: no explosions but much simmering 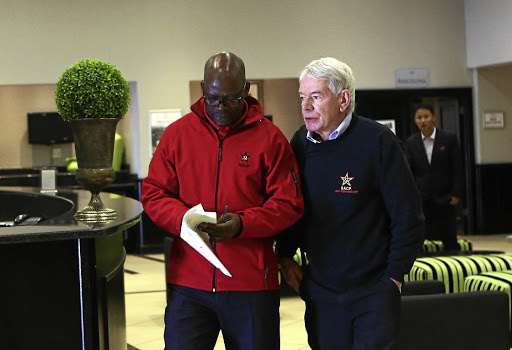 While the ANC is preparing for an epic showdown at its elective conference in December, the national congress of its alliance partner, the SA Communist Party, is likely to be somewhat of an anticlimax this week.

The SACP's 14th national congress begins in Boksburg today, with no signs of leadership contestation after earlier expectations there could be a shake-up.

There had been an internal push for the SACP to "go it alone" in the 2019 elections, but it is unlikely there will be a firm resolution on this matter.

General secretary Blade Nzimande should retain his position but his deputy, Jeremy Cronin, said yesterday he would not be available for re-election.

With Nzimande restrained by being in the cabinet and the ANC national executive committee, the second deputy general secretary, Solly Mapaila, has largely become the voice of the SACP. He is likely to emerge from the congress with greater responsibilities and a more prominent role. He has fired up the party in the past year, becoming the lead campaigner against state capture and for President Jacob Zuma to step down.

SACP members who had pushed for Mapaila to take over the top post have now been persuaded Nzimande should stay "for the sake of unity and continuity".

Many ANC members and stalwarts, disillusioned with the party and Zuma's leadership, have rallied behind the SACP, seeing it as a useful pressure point in the alliance.

Although ANC stalwarts and veterans decided to boycott last week's ANC national policy conference, they have a special slot at the SACP congress in a Thursday session on state capture. There will also be presentations on state capture by the SA Council of Churches and a group of academics.

Another closely watched session will be tomorrow when Deputy President Cyril Rama-phosa will address the congress. Mapaila said yesterday the SACP had informed the ANC it preferred Zuma not to speak at the congress in light of its call for him to step down and the commotion at Cosatu's main May Day rally when the president was booed and the event called off.

The Umkhonto weSizwe Military Veterans' Association has decided to snub the SACP congress, taking exception to the party's outspoken stance against the president and the Guptas.

The SACP is likely to emerge from the congress with tougher language against Zuma's leadership and state capture.

Cronin said the discussions would take into account the possibility of the ANC "imploding" or "going over the cliff" in December and what would be needed to replace it should that happen.

Although the alliance is essentially dysfunctional, the SACP congress is unlikely to decide to withdraw as the ANC's ally.