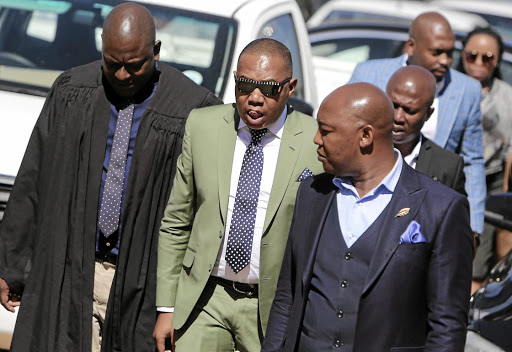 Several months ago Mduduzi Manana was hailed as one of the youngest members of parliament, holding the post of deputy minister of education, but on Wednesday the Randburg Magistrate's Court heard he had previous convictions - including one for stealing a can of cold drink in 2004.

His lawyer, Michael Bill, told the court his client had simply forgotten to pay for the drink.

The second conviction was also for theft, but the disgraced former minister claimed he could not recall what he had stolen. He was convicted in 2005.

During his bail application in August, Manana told the court he had no convictions.

Manana's latest brush with the law was for assaulting three women in what he alleges was an alcoholic stupor. The assault happened at a night club in Fourways.

Manana 'leaves it to magistrate'

Assault-accused Mduduzi Manana, 33, is "quite remorseful" about beating up a woman.
News
4 years ago

Just days after, Manana was granted R5,000 bail and he later pleaded guilty. He confessed to battering Mandisa Duma, Noluthando Mahlaba and Thina Mapipa after they labelled him as gay. Manana was willing to pay a R100,000 fine and serve 500 hours of community services for his crime.

The two co-accused in the matter, who are alleged to have had a hand in beating the women, were jailed and later got bail.

They will be tried separately and are yet to plead.

The probation officer in Manana's case, Masisi Modikoane, recommended he serve 1,000 hours of community services, pay the medical expenses of his victims and undergo anger management.

She told the court that the victims each wanted R100,000 in compensation but she opposed this.

Manana will have to wait until Monday to see if he will escape with another fine for beating the women or serve time behind bars.

Manana admits to previous theft convictions including stealing a Coke

The Randburg Magistrate's Court has heard that former deputy minister of higher education Mduduzi Manana has two previous convictions‚ one of assault ...
News
4 years ago

Nightclub Cubaña in Fourways‚ Johannesburg‚ has been fined R200‚000 for selling alcohol after hours.
News
4 years ago

Former deputy minister of higher education and training Mduduzi Manana, who was accused of assaulting three women, has pleaded guilty to all the ...
Politics
4 years ago