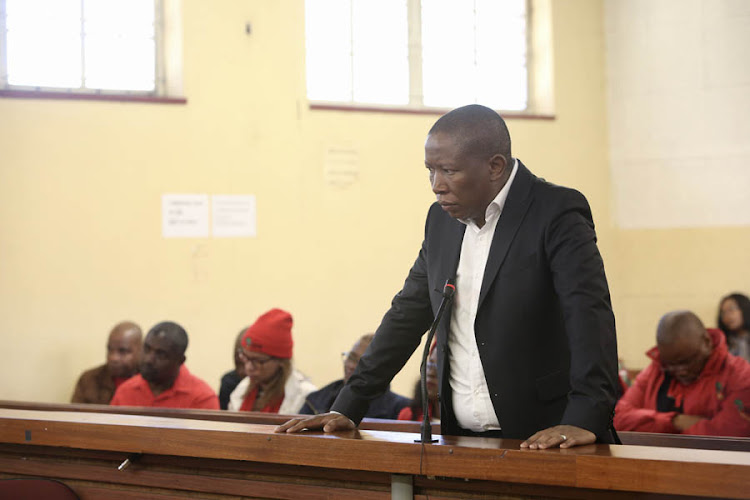 EFF leader Julius Malema stands in the dock in The Newcastle Magistrates court on charges of incitement.
Image: Jackie Clausen

The court appearance of EFF leader Julius Malema in the Newcastle Magistrate's Court on Monday was over in minutes.

The controversial politician’s criminal case stalled because he is challenging the constitutionality of the law under which he is charged.

Malema faces criminal charges relating to alleged contravention of the Riotous Assemblies Act. Malema vowed to challenge the constitutionality of the Act under which he has been charged for allegedly inciting his supporters to invade land.

In 2014 he told the EFF’s elective conference in Bloemfontein: “We’re going to occupy the unoccupied land because we need land. For us to eat‚ we must have the land. For us to work‚ we must have the land. I come from Seshego –if there is unoccupied land‚ we will go and occupy the land with my branch. You must go and do the same in the branch where you come from.”

On Monday EFF supporters‚ dressed in red‚ filled the public gallery as their leader – dressed in a black suit – stood in the dock.

Prosecutor Jabulani Mlotshwa told the court that Malema’s challenge of the apartheid-era legislation had hamstrung progress in his prosecution.

“The challenge launched by the applicant was meant to be heard by the High Court but the matter was postponed until September‚” he said.

“Both matters are now set down for a special motion and it was ruled that the applicants were to file their heads of argument by June 8. The state attorney informs me that their papers have been filed.

“Because of this and because the judgment may take time‚ we request that the matter be postponed to February 25 next year. Hopefully that will make things clearer.”

In June last year‚ Malema told supporters in the northern KwaZulu-Natal town of Newcastle that white people could not claim ownership of land because it belongs to the country’s black African majority.

In February‚ the EFF proposed a motion for expropriation of land without compensation in parliament‚ which was passed by the majority.

We have to stand up to the EFF's politics of hate

Malema's proto-fascist movement exploits South Africa's racialised tropes, using them to mobilise on a racist ticket to serve its own ...
Opinion & Analysis
4 years ago

The South African Human Rights Commission (SAHRC) confirmed receipt of a complaint from the DA about remarks EFF leader Julius Malema made at Youth ...
Politics
4 years ago

Return the land or face a ‘revolution’: Malema

EFF leader Julius Malema has warned that land must be returned to black people or things will get ugly.
Politics
4 years ago