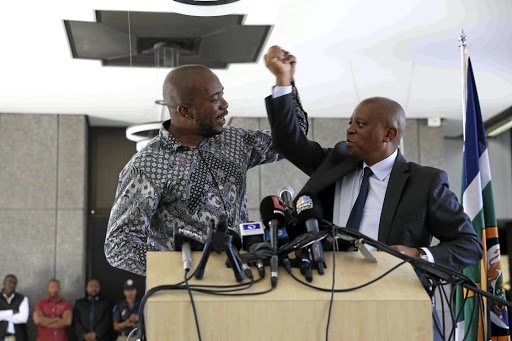 The leader of the DA in Johannesburg, Funzela Ngobeni, has resigned from the party.

Ngobeni announced his resignation in a letter to the party's Johannesburg structures and staff on Monday, saying he was going to join former Joburg mayor Herman Mashaba's People's Dialogue.

He is the latest high-profile figure to leave the DA in recent months.

In his letter, dated March 2, he wrote that he was resigning from the DA and from the roles he held in the party. Ngobeni was the DA's caucus leader in the Johannesburg council and the party's regional chairperson in the city.

“I have no intention of dwelling on too much negativity, as I know many of you are already battling to come to terms with the trajectory the party has taken lately. Suffice to say I have taken the decision to join Herman Mashaba's efforts, effective tomorrow, to build a new political alternative in South Africa which will put the people of our country at the centre of its efforts,” he said.

The DA chose him as its mayoral candidate to fill Mashaba's shoes when the millionaire businessman resigned late last year, but Ngobeni was defeated by the ANC's Geoff Makhubo for the mayoral chain.

He wrote: “I think all of us agree that the recent return to power of the ANC in Nelson Mandela Bay, Johannesburg and possibly soon in Tshwane, is the worst thing to have happened to our residents in those cities. They were hoping the results of the 2016 local government election would deliver real change. My belief is that Mashaba's initiative is the only way that we can realise this objective,” said Ngobeni.

Ngobeni did not respond to requests for further comment.

Reacting to Ngobeni's resignation, John Moodey, DA leader in Gauteng, said: “I always worked closely with him. My experience of him is that he is an honourable individual and committed to and hardworking in his task to serving the people of Johannesburg under the DA banner.

He said DA MP Tsepo Mhlongo, who is also the deputy chairperson of Johannesburg, will take over running of the region until a regional congress to elect a new regional leader is held later this year.

A Tshwane council meeting, where the capital city's new mayor was expected to be elected, collapsed again on Thursday, raising fears that the ...
Politics
2 years ago

The audio is expected to cause trouble for Johannesburg mayor Geoff Makhubo when it is raised in the next council meeting.
News
2 years ago