ANC deputy secretary-general Jessie Duarte said the party chose Tshwane to launch the manifesto because “we really need to win this city back”.

Mbeki's attendance of the launch by party president Cyril Ramaphosa is seen as politically significant as it represents his endorsement of the campaign. He has previously snubbed such events under former leader Jacob Zuma.

Due to Covid-19 regulations, the launch in Tshwane on Monday lacked the usual glitz and glamour it has become synonymous with over the years. Only a handful of supporters and leaders were allowed in and occupied the black chairs that were scattered around the square.

Most of those in attendance were ANC volunteers helping the party with crowd control. A few supporters were allowed in to occupy the chairs, as other supporters watched from behind a fence. There was very little singing and dancing from the crowd - a tradition at ANC events. This time, it was a more relaxed mood emulating a formal event, with mostly staying seated and rising only occasionally to sing.

But by around 6pm, the venue had began to fill up. Shortly before Ramaphosa's arrival, ANC elections head Fikile Mbalula asked that the gates be opened so that empty seats could be filled. 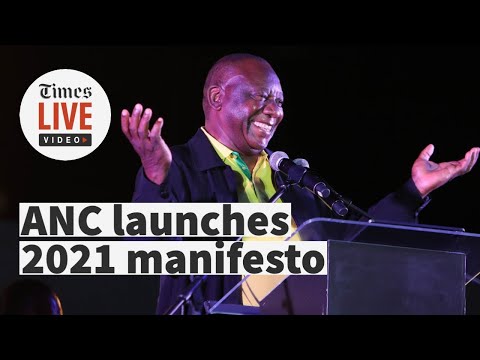 Mbeki arrived at the event just an hour ahead of ahead of Ramaphosa. Motlanthe was also in attendance and joined ANC leaders on stage.

The party is hosting the event in Tshwane as an attempt to demonstrate its seriousness in reclaiming the capital city it lost to the DA in 2016. Speaking on the sidelines,  ANC deputy secretary-general Jessie Duarte said the party desperately wanted to win the city back.

“We've come here to Tshwane because we really need to win this city back, and we are determined,” she said.

Image: Alaister Russell Crowds gather in Tshwane on Monday as the ANC readies itself to launch its 2021 local government election manifesto.

According to Duarte, had it not been for Covid-19 regulations, the place would be a hive of activity.

“Honestly, it's only because of Covid-19, otherwise we would've been in a major massive stadium somewhere,” she said.

She said that she was confident that Ramaphosa's message would resonate not only with Tshwane residents, but with South Africans as a whole.

Asked about the decision to have Ramaphosa deliver his speech at 7pm, Duarte jokingly said, “You're asking to come into the kitchen.”

“That's prime time. We want to make use of your stations. It gives us maximum coverage,” she said.