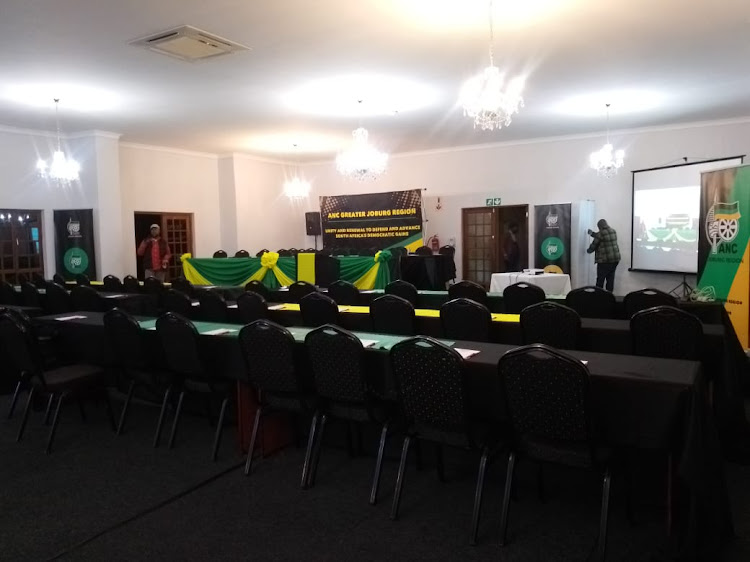 Preparations underway for the ANC regional conference at the Idle Winds Lodge and Conference Centre in Centurion where about 300 delegates from 120 branches were expected to elect new regional leaders.
Image: Nonkululeko Njilo

ANC NEC deployee Enoch Godongwana has promised the party's Johannesburg regional conference will go ahead with no violence despite an intensifying leadership race.

He was speaking on the side lines of the conference preparations at the Idle Winds Lodge and Conference Centre in Centurion where about 300 delegates from 120 branches were expected to elect new regional leaders.

“There is no drama, we are expecting a proper ANC conference and peaceful proceedings. We’ve got disciplined cadres of the movement in this region,” he said.

His remarks come after violent scenes erupted at the ANC’s Ekurhuleni regional conference held at the Indaba Hotel in Fourways, Johannesburg, last week.

The Johannesburg conference got off to a slow start on Friday evening with only a handful of delegates showing up hours after the programme was scheduled to begin.

Security had been beefed up at the gate with personnel checking all vehicles for alcohol and weapons.

Two hours after the conference was due to start, regional spokesperson Sasabona Manganye said he had no idea where delegates were and that they could have been having last-minute caucus meetings.  He had also not arrived at the venue.

“The conference will definitely go ahead,” he said.

Moerane and the current regional secretary Dada Morero were expected to go head-to-head at the conference on different leadership slates. The former friends allegedly had a fallout six months ago over the mayorship of Johannesburg after the local government elections.

TimesLIVE understands that Moerane’s position on the slate is now occupied by acting chairperson Eunice Mgcina who is said to be now contesting for the position after being initially eyed for the deputy position. Meanwhile Justice Nkalonkulu is preferred for the position of regional secretary, Loyiso Masuku as deputy secretary and Maxwell Metsamba for regional treasurer.

Morero was also confident that despite previous hurdles the conference would go ahead smoothly.

“We are in high spirits. This week we dealt with all the disputes until this morning. All the appeals have been cleared so we have been given a go-ahead by the national team. Our audit report has been signed off, so we are ready, we are happy,” he said.

Provincial chairperson David Makhura is expected to address the conference on Saturday morning.

Opposition parties have argued that whichever leadership slate wins the conference, the result will have no bearing on the metro. This after the ANC was relegated to opposition benches after the 2021 local government elections.

On Thursday, TimesLIVE reported that the ruling party was losing electoral support in several ANC strongholds after by-elections conducted at the weekend.

Parliament’s joint standing committee on intelligence (JSCI) has nominated Reverend Frank Chikane for the position of SA’s next inspector-general of ...
Politics
1 month ago