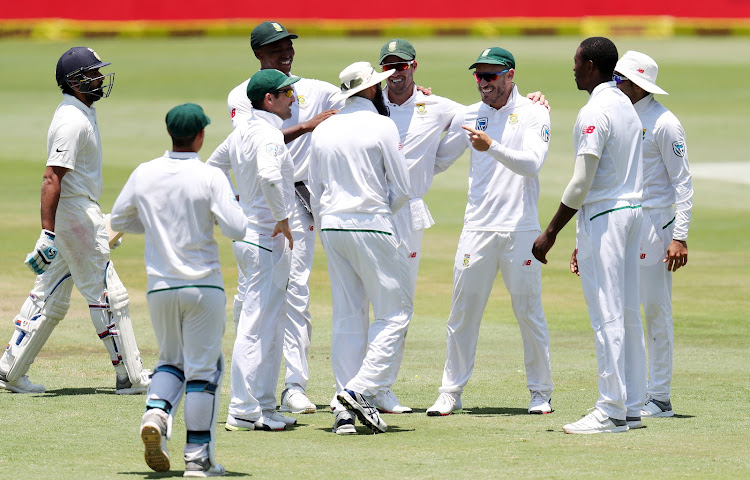 AB de Villiers of South Africa catches out and celebrates Rohit Sharma of India during the 2018 Sunfoil Test Series match between South Africa and India at SuperSport Park, Centurion South Africa on 17 January 2018. South Africa won by 135 runs to take an unassailable 2-0 lead in the three-match Test series. The third and final Test starts at the Wanderers in Johannesburg on Wednesday 24 Januray.
Image: Muzi Ntombela/BackpagePix

Of the 14 test tons scored by a variety of Indian Test batsmen in South Africa since the 1992/03 Friendship Series‚ none of them have come in Test wins.

That includes five by the legendary Sachin Tendulkar and two by current captain Virat Kohli.

Kohli's Highveld double of 119 at the Wanderers nearly five years ago and his recent 153 could have and should have amounted into something more tangible for his team.

Seemingly afflicted by the over-reliance on one batsmen's ability in the India side of the late 1990's when Tendulkar was in his prime‚ the rest of the team did not deliver.

This explains why India have won only one test in Australia‚ England and South Africa in a combined 24 matches.

However‚ this is the same team that's run roughshod over every visiting side at home in the past two years.

Going into this series‚ they'd won nine consecutive series since August 2015‚ six of which were at home and collected 21 wins out of 30 in the process.

The relinquishing of this proud record shared with Australia explained Kohli's tetchiness in the post-match press conference and his eventual mini-explosion.

“How many test matches have we won out of 30?‚" Khohli snapped.

"How many have we won?

"21 with two losses and the rest draws.

"It doesn't matter where ever we play‚ we want to do our best.

"I'm here to answer your questions and not to fight with you.

“We have to believe we are the best side in the world because if we had come here without the belief to win the series‚ there was no point of us coming here.

"We haven't come here to participate.

"To answer another question‚ how many times did South Africa come into the game in India or coming close to winning games in India?

"Can you count them?

"We aren't complaining about Cape Town either.

"The game was finished in three days.

"We are not complaining about conditions and the pitches.

"We've come here to play and we've had equal opportunity to win in both matches.”

Within the same gathering‚ Kohli also soberly pointed out one of the reasons why India ended up being a distant second best in both Tests.

It boiled down to an inability to marry their three core disciplines into a cohesive machine.

Understandably‚ it's been India's bowling that's won them their two tests in South Africa in Johannesburg in 2006 and Durban four years later.

However‚ when the batting has come to the fore‚ the bowling has failed and vice-versa.

Outside of Kohli's significant and magnificent first innings contribution in favourable conditions‚ the main batsmen didn't front up or capitalise on starts.

“Everyone wants to perform everywhere and people think about those things because the last time we were here‚ we batted well but didn't bowl well.

"This time we bowled better but we didn't bat well as a unit.

"What's annoying is that it hasn't come together at one time‚ which has been the case for South Africa.

“The hurtful part is that both skills haven't come together at the right time and that includes fielding.

"All three things have to come together in tough situations for you in order to win test matches and series.

"That's something we've failed to do.”

There's nothing like a run-out that gives you a window into a batting team's scrambled frame of mind.
Sport
4 years ago