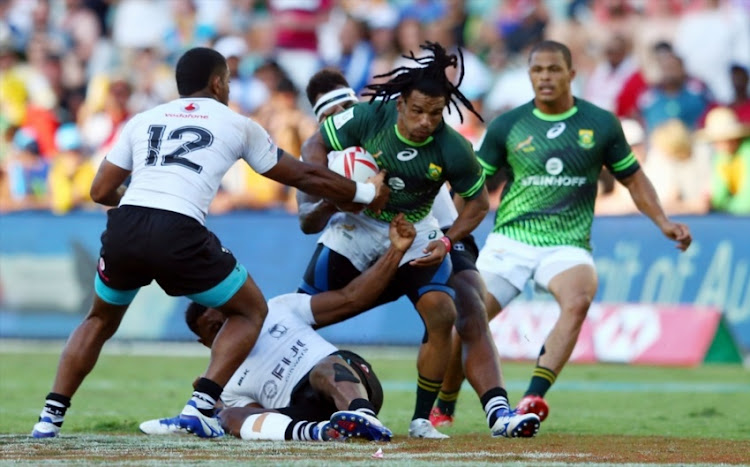 The Blitzboks in action against Fiji.
Image: GETTY IMAGES

Olympic champions Fiji delivered their best performance in nearly two years as they beat the Blitzboks 24-17 in the final of the Hamilton leg of the World Sevens Series on Sunday.

Victory meant that Fiji were the fourth different winners after four tournaments this season.

The Blitzboks though have been the most consistent side with three final appearances and after claiming another 19 log points for their runners-up finish in Hamilton‚ head the standings with 77 points.

They went into the weekend four points clear of NZ‚ but the Kiwis could only finish fourth on home soil and have slipped four points further behind SA with 69 points.

Fiji are up to third with 62 points and Australia fourth on 60.

With the halfway mark of the campaign approaching in Las Vegas in four week’s time‚ the overall 2017/18 champion‚ is almost certainly going to come from the top four.

Fiji battled through a tough quarterfinal against Samoa‚ winning 12-10 before seeing off NZ 14-12 in their semi-final.

The Blitzboks cruised past Scotland by 22-0 in the quarters and gained revenge on Australia after losing the previous week’s final in Sydney against the Wallabies‚ winning 24-5 to set up the clash with Fiji.

Injuries blighted the Blitzboks’ weekend as they lost Dylan Sage to concussion on day one‚ while Rosko Specman and Justin Geduld were injured before the final.

But in the final‚ despite running into a 19-5 lead thanks to first half tries from Kwagga Smith‚ Kyle Brown and Branco du Preez‚ Fiji came storming back with some brilliantly constructed scores.

Flier Alasio Sovita Naduva scored a hattrick‚ which all had their genesis in some sublime handling and other-worldly passing.

Du Preez was also sin-binned early in the second for a late tackle‚ and while he was off the field‚ Fiji scored two tries to hit the front and break the reigning champions’ will in a titanic struggle.

Springbok Sevens coach‚ Neil Powell‚ was disappointed in the result of the final‚ but overall it was a good trip for the team and he is proud of their effort.

“That is sevens for you. We had an opportunity to score and did not‚ they countered and scored and then got the momentum.

"One or two moments like that and the game is gone‚” the coach explained.

“It was a very good and gutsy performance by the team. We fought until the last minute‚ I cannot ask for more.

The Blitzboks showed their intent on the opening day of the World Sevens Series tournament in Hamilton yesterday. They put down a marker, not just by ...
Sport
4 years ago

"We had a tough week‚ but the guys really stuck to their guns.”

Powell elaborated on their long-term strategy.

“We are also managing our players‚ as we have a big season in 2018.

"The decision not to risk Justin and Rosko in the final was because of the bigger picture. They need to be 100% come Las Vegas‚ as we are losing four players back to fifteens now.

"Same with Philip Snyman and Ruhan Nel‚ who are already doing recovery after being sent back from Sydney.”

Powell is not complaining about extending their overall lead either.

“If we won both finals we played on tour‚ that would have been ideal.

"But we increased our lead and that was important for us.”