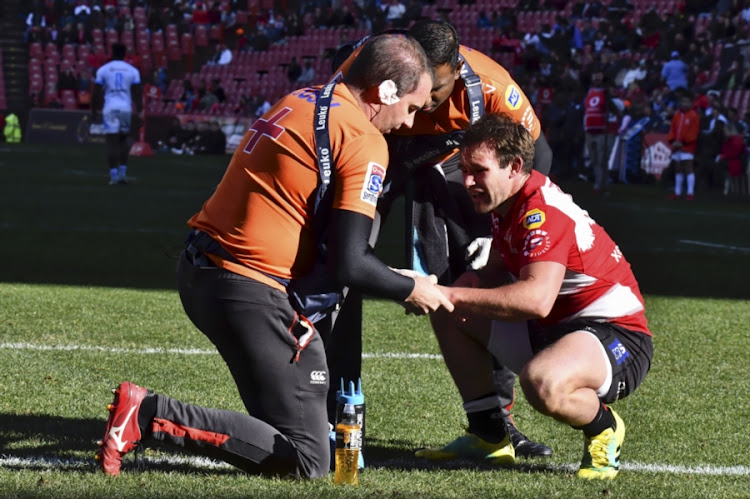 Nic Groom is attended to by the medical team after sustaining a hand injury during the Super Rugby match between Emirates Lions and Vodacom Bulls at Emirates Airline Park on July 14, 2018 in Johannesburg, South Africa.
Image: Wessel Oosthuizen/Gallo Images

Nic Groom’s experience and refined kicking game were elements that were to serve the Lions well in the knockout stages of Super Rugby.

They’ll have to do without it‚ however‚ after he broke his left hand.

The scrumhalf left the field in the 14th minute of the Lions’ Super Rugby clash against the Bulls last weekend and was replaced by Ross Cronjé.

He underwent surgery to his left hand on Tuesday and will miss the remainder of the Super Rugby campaign.

Groom’s out of hand kicking‚ which was most recently polished with a stint at Northampton Saints‚ would have proved more than useful in the event of the Lions qualifying for the final against the Crusaders on soggy New Zealand soil.

In Groom’s absence Cronjé is likely to have a heavier load in the knockout stages which starts with this weekend’s quarterfinal against the Jaguares at Ellis Park.

Although the Jaguares’ claws were clipped in a drab affair against the Sharks in Durban last weekend‚ you have to wonder how much they were prepared to invest in the match ahead of the play-offs‚ especially after the Lions confirmed themselves as conference winners.

The Lions know they have to up the ante.

Bulls coach John Mitchell left his employers in no doubt about what they need to do before the start of next year’s Super Rugby competition.
Sport
3 years ago

Last year they had the benefit of playing at home throughout the knock-out stages before coming unstuck against the Crusaders in the final.

From the moment they went into the knockout phases the then departure of coach Johan Ackermann became the brightly coloured elephant in the room.

“Last year it was emotional. Especially before the final‚” admitted captain Warren Whiteley‚ who was confined to the sidelines with injury.

Whiteley argued‚ although the team will lose more players at the end of this campaign‚ last year was particularly poignant with the talismanic figure of Ackermann heading north.

Sharks coach Robert du Preez is optimistic ahead of their Super Rugby quarterfinal against the Crusaders‚ saying it will be a wonderful opportunity ...
Sport
3 years ago

Having finished runners up to the Crusaders in the league stages this year the Lions have the benefit of a home quarter and semifinal and are in a position to shape their own destiny until the final.

“Each team in the quarters can’t do much now‚ because there is nothing much you can do now. The hard work has been done long‚ long time ago. Now it is about the small little things.

"For us it is about sticking to those processes. It is going to be crucial not veering away from that. I believe we have done that well in the past.”