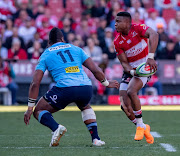 Image: Gordon Arons/Gallo Images Aphiwe Dyantyi of the Emirates Lions about to pass as he is closely watched by Taqele Naiyaravoro of the Waratahs during the Super Rugby semi final match at Emirates Airline Park on July 28, 2018 in Johannesburg, South Africa.

The Lions received a huge boost with the news that wing Aphiwe Dyantyi and flank Cyle Brink were declared fit to tour with the team for next Saturday’s Super Rugby final in Christchurch.

Dyantyi tweaked his hamstring on his way to one of the tries of the season during last weekend’s 44-26 semi-final win over the Waratahs at Ellis Park and didn’t appear after halftime.

But after scans‚ he has been declared fit and should start against the Crusaders in the final.

Brink missed the semi-final after sustaining a ‘stinger’ when making a tackle in the quarterfinal against the Jaguares two weeks ago.

But after 10 days of rehab and rest‚ he is also ready to take his place in the biggest game of the season.