“Keanin is an incredibly intelligent player” 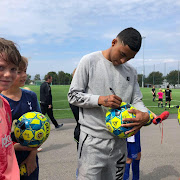 Swedish top-flight side Varberg will be an important side to watch in the coming season for a glimpse into the future of South African football after they extended the contract of midfielder Keanin Ayer for another two years.

Having also signed Tashreeq Matthews last week‚ and with a deal ‘95 percent’ done for another junior international‚ Luke le Roux‚ it could be that three of the country’s top midfield prospects are all housed under one roof for the 2020 campaign.

Ayer‚ 19‚ has been rewarded for helping the club to promotion last season‚ where he played in 29 of their 30 league games and was the driving force in the middle of the park for coach Joakim Persson.

It meant he was linked with a number of other clubs‚ including top Swedish side IFK Gothenburg‚ where May Mahlangu excelled previously‚ but Varberg were desperate not to lose him and have tied him down for a further two years.

Ayer has certainly not followed a conventional path for South African footballers as he was plucked from the Johannesburg suburb of Eldorado Park‚ but was sent to the Right to Dream Academy in Accra‚ Ghana at the age of 13.

He spent five years there before winning a move to Varberg‚ making his professional debut as an 18-year-old in 2018.

“He complements his teammates with his quality. Since he is a very individual‚ technical player‚ he understands a lot about the game.

Matthews‚ 19‚ will be hoping to spark a career that has waned in the last 12 months.

From the highs of signing for German giants Borussia Dortmund‚ he spent some time with the reserves at Utrecht in the Netherlands‚ and played a couple of games for Swedish side Helsingborg last season.

“He has an extremely high maximum level‚” Persson told the club’s website.

“Tashreeq is young so we will see how he can keep that level for a whole season.

“However‚ the whole team has a low age‚ so we hope it will be good for him with many players of the same age around him and that he will thus quickly get fit in.

“But he has a lot of potential‚ so it will be very exciting and see what we can get out of him.”

Persson also revealed earlier this month that a deal for SuperSport United midfielder Le Roux‚ 19‚ was very close‚ though the club have yet to make a formal announcement.