AmaZulu coach Benni McCarthy has been fined R200,000, with R150,000 suspended, in a Premier Soccer League (PSL) disciplinary committee (DC) hearing for slamming the performance of referees in a post-match interview after a DStv Premiership match.

McCarthy’s comments came after 10-man AmaZulu drew 0-0 against SuperSport United at Kings Park in Durban on September 14 when he called the performance of referee Thando Ndzandzeka “shameful”.

AmaZulu had defender Tercious Malepe sent off in the 74th minute.

McCarthy had said in his post-match television interview with pay-channel SuperSport: “I think I have to commend the players for not losing their minds because [we got] nothing [from the officials]. Nothing. You win the ball, the opposition get a free-kick.

“It looked like it was a very one-sided affair, with one team. So, I don't want to be controversial, but come on, our league is precious and we demand for teams to step up their game to make this league what it is. 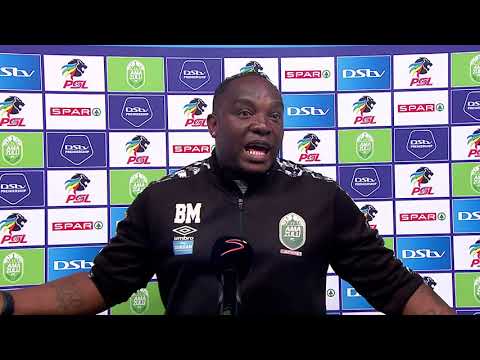 “When I come here everybody is going to be like, 'Ha, he must win games’, this, this, this – critics.

“But come on, how can you accept criticism when you've worked during the week on things, and then [undermined] by the officiating?

“And it causes your team to not even have a fighting chance. There was nothing there. The referee was, honest to God, he was ...

“And all the experience that he has in this league and then that's the performance  he gave. So that was shameful.

"But nevertheless I think it was two teams who wanted to win the game, so both teams went for it.”

McCarthy added later: "But, ja we've not lost a game. We had 10 men for most of the game, thanks to the referee. We held them. So the quality is there."

McCarthy has had a history of DC sanctions for speaking out on the performances of match officials, which is frowned on by the PSL.