Image: Gotham/GC Images via Getty Images The Duchess of Sussex seen before her baby shower on February 19 2019 in New York.

After a lot of "will she, won't she", Meghan Markle had a baby shower Stateside, despite some concerns about her travelling across the pond.

According to Hello Magazine, the shower was held in New York yesterday afternoon around 4pm at the Mark Hotel. Markle reportedly arrived in the Big Apple on Monday for what is believed to be a five-day mini-holiday.

Only 15 of her closest friends were invited to the do, including tennis superstar Serena Williams and actresses Priyanka Chopra Jonas and Abigail Spencer (a former Suits co-star).

Stylist Jessica Mulroney is said to be the friend behind yesterday's fancy affair.

It’s been a long day, but it’s great to see Meghan catch up with her girlfriend @serenawilliams . #MeghanMarkle #DuchessMeghan #SerenaWilliams #RoyalBaby #RoyalBabyShower

Although details about the shower are limited, hundreds of flowers were seen being delivered to the venue. This included pink roses (perhaps a clue about the baby's gender?), Meghan's favourite flowers and even an orange tree.

Image: Gotham/GC Images via Getty Images Flowers and other supplies arriving for the Duchess of Sussex’s baby shower in New York. 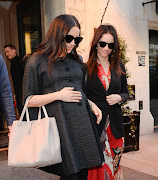 Image: Raymond Hall/GC Images via Getty Images The Duchess of Sussex and Abigail Spencer on the day of her baby shower in New York City.

Obviously we are all dying to know what gifts she got, but all we know for now is that one of them was a babyletto three-in-one convertible crib costing just over R5,000.

Image: Gotham/GC Images via Getty Images The baby crib that was gifted to the Duchess of Sussex at her baby shower in New York.