'I want you to see yourself on the car': Artist makes Porsche's 911 his own

Image: Supplied Nelson Makamo adds a touch of art to his Porsche 911.

From small businesses with cheerfully branded vans, to memorable motorsport liveries seared onto the collective psyche of spectators, mobile art comes in various forms. The automobile has been used as a platform for expression since its birth.

SA deserves a special mention if you are talking about vehicular art. Vibrant exterior schemes have long been a hallmark of the minibus taxi fraternity, for example. Esther Mahlangu, a veritable national treasure, took Ndebele art to the global stage with a masterpiece that used the 1991 BMW E34 5 Series as a canvas. It is on display at BMW's Munich museum. She also worked magic on a 7 Series and a Rolls-Royce Phantom.

Nelson Makamo, known for his powerful depictions of children, recently took the wraps off a project that sees his childhood motoring ambitions fulfilled. The globally celebrated, Limpopo-born artist, whose work has featured on the cover of Time magazine, decided to put his unique stamp on his own Porsche 911.

The jet black metallic Carrera coupé, dubbed "My Life in Motion" by Makamo, features hand-painted elements: the rear bumper panel, as well as side mirror covers, seat backs and interior trim panels. The painting was done at his studio, then taken to Porsche SA's headquarters in Johannesburg for lacquering and fitment. 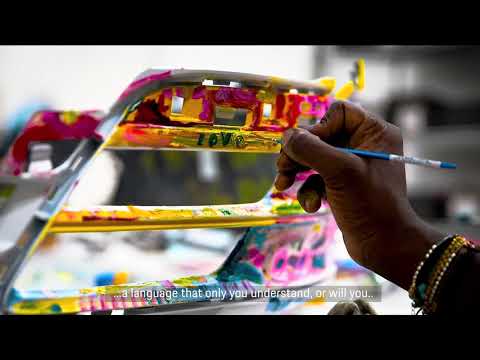 In a release, Porsche said: "There was no brief — it was entirely Nelson's story to tell; the story of a young man who chose to believe that he can succeed."

"This project encouraged Nelson to reflect on his personal journey, recalling the various individuals that had an impact on his life. Doing so, he was able to portray his belief in community through the depictions painted on the vehicle. This community has no race, age, gender or geographical origin, representing an international collective of individuals."

"This 911 is meant to inspire anyone to believe that they can succeed through their passion," said Makamo. "I always knew I was going to own a Porsche, I just never knew that my relationship with the brand would start this way — and it's only the beginning."

"What better way to summarise my journey through life than by putting it in a form of collectives. We are at a point in time in the world where we are slowly moving into one culture because we care about each other as people more than anything. I want you to see yourself on the car," he said, referring to the rear bumper panel portraying a crowd of people.