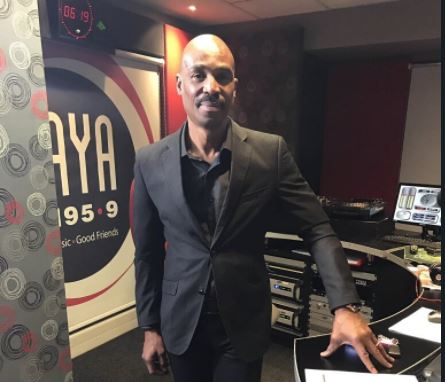 Radio veteran Bob Mabena has revealed some of his biggest fears as a 48-year-old man, which include being diagnosed with a lifestyle-related disease, which he said could be avoided by adopting a good diet and regular exercise.

Speaking to TshisaLIVE the radio personality explained that he had stopped going to the gym some time last year but that since then he has buried a scary number of friends to diseases like diabetes and hypertension.

"I stopped going to gym some time last year, its not even old age, I just got lazy. But now I need to attack the damn thing [growing pot belly] because I don't want to risk my health. I have recently lost too many friends to such diseases and I don't want to fall victim to them too. That is why I need to lead a life that is as healthy as can be," he said.

Bob said that at his age HIV was not his biggest worry but rather diseases such as diabetes, high blood pressure and heart attacks, which scared him more because a healthy lifestyle could prevent them to some extent.

The radio veteran said part of leading a holistically healthy lifestyle meant that one had to explore different pleasures that life offered.

This is also the reason why Bob has started attending theatre plays and polo matches.

"I don't go to polo events or opera or a picnic just because I am able to (of course having the means to do these things matter) but I go there to expand my knowledge and perspective on life. I'll be at the Allure which for one always forces me out of my comfort zone, at least where fashion is concerned," he said.

Bob explained that "fashion" had never been a big deal to him, saying all he owned was "black and all shades of blue" suits. He added that his wife has even had to intervene so that their looks match.

"My wife has recently shown more interest in my style because I made it so hard for her to look fashionable, so that should be interesting to watch. I own a lot of black suits and every shade of blue but that's just as far as I was willing to go. But I was so proud of myself when I recently ventured into another colour, I bought myself burgundy shoes and I am thinking of getting a burgundy colour blazer," he said.

Actress Lerato Mvelase is finally ready to introduce Mzansi to her music after announcing last year she would be releasing new sounds.  Speaking to ...
TshisaLIVE
4 years ago

Rapper Cassper Nyovest has once again caused a stir on social media after declaring himself as 'Africa's finest' musician, with Twitter fans mocking ...
TshisaLIVE
4 years ago

He's one half of the Major League twins and one of the most talented musicians in Mzansi and guess what ladies? Bandile Mbere is single!
TshisaLIVE
4 years ago