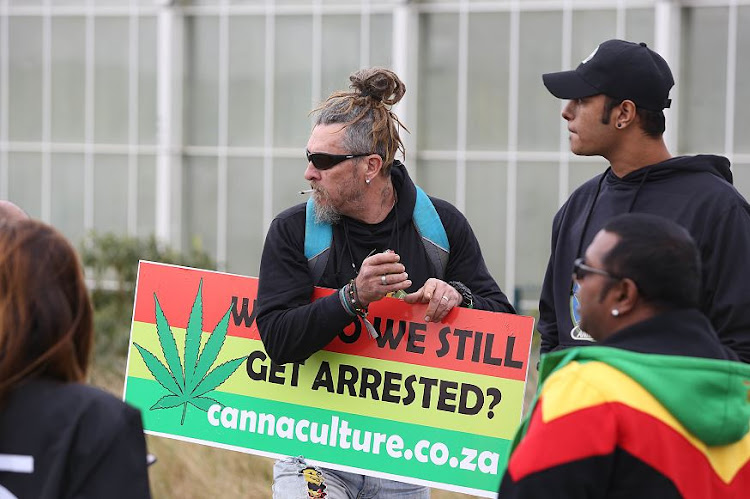 South Africa's cannabis community wants to know why they are being arrested for lighting up a joint when a "legal cannabis plantation" is quietly growing in a greenhouse next to Durban's King Shaka International Airport.

In March this year the Western Cape High Court ruled that laws prohibiting the use of cannabis and the possession‚ purchase or cultivation of it in private homes and for personal consumption were unconstitutional.

On Friday‚ nine demonstrators‚ representing those lobbying for the legalisation of dagga‚ descended on the AgriZone in the Dube TradePort where they claim cannabis is being grown "secretly". The demonstration was sparked by a blog claiming that the House of Hemp was given permission to farm hemp - a variety of Cannabis sativa - in a "16 hectare high tech agricultural development zone".

According House of Hemp's website‚ in 2010 it became the first private company to be awarded a six-year exclusive permit from the Department of Agriculture and the Department of Health to legally cultivate and process hemp in South Africa.

"The endeavour for a robust expansion into a new industrial market led to House of Hemp’s interest in the supply of hemp fibres and oils as well as related byproducts - tow‚ biomass‚ dust‚ seedcake - for more sustainable industrial uses with significant and varied applications on a global stage‚" the website states.

The company was founded Dr Thandeka R Kunene. Attempts to contact Kunene on Friday were unsuccessful.

Leading Friday's demonstration‚ Krithi Thaver of Canna Culture said growing hemp was illegal in South Africa and questioned why Kunene was given a special permit to cultivate it when others were being denied the opportunity to grow and enjoy it.

Dube TradePort spokesman Vincent Zwane confirmed that the House of Hemp was a tenant at the AgriZone.

"The organisation is a fully licensed grower of the hemp plant‚ through the Department of Health. From a Dube TradePort Corporation perspective‚ having House of Hemp as a tenant presents a huge potential to increase international exports of high-value airfreight‚ this is in addition to creating a number of local jobs. House of Hemp received a permit for operating out of their site within Dube AgriZone on the 4th of April‚ 2016. Currently‚ House of Hemp is in the process of renewing this permit following their completion of their trials‚" said Zwane.

In March this year the Western Cape High Court ruled that laws prohibiting the use of cannabis and the possession‚ purchase or cultivation of it in private homes and for personal consumption were unconstitutional.

In the March ruling Judge Dennis Davis gave Parliament 24 months to make the relevant changes to legislation on dagga but added that until the law was changed cannabis was still an illegal substance.

Davis's ruling addressed the issue of the right to privacy but Myrtle Clarke and Julian Stobbs‚ known as the dagga couple‚ are fighting in the high court in Pretoria for the legalisation of cannabis‚ which will allow users to smoke outside their homes.