'This is an historic moment for Zimbabwe' 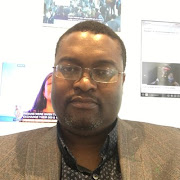 Image: Alex Magaisa via Twitter “It’s a coup in all but name. You can describe a frog by many terms but it remains a frog. This is a coup‚” Alex Magaisa told radio 702.

A law lecturer who acted as political advisor to former prime minister Morgan Tsvangirai says that all evidence points to a “coup” underway in Zimbabwe.

Zimbabwean academic Alex Magaisa‚ who is now a lecturer in the UK‚ said on Wednesday: “This looks like the end of an era. This is an historic moment for Zimbabwe.”

He was speaking on radio 702 about events unfolding on the streets of the country after the military intervened overnight to act against what they described as “criminals” around President Robert Mugabe who were “causing social and economic suffering in the country”.

A statement released overnight by the country’s defence force was at pains to point out that they were not engaged in a “military takeover” but Magaisa did not concur.

“It’s a coup in all but name. You can describe a frog by many terms but it remains a frog. This is a coup‚” he told radio 702.

Mugabe‚ he added‚ had never been in this type of situation. “It shows that‚ from now on‚ things will definitely never be the same again‚” he said.

In a statement‚ posted on the Zimbabwe Broadcasting Corporation website in the early hours of Wednesday‚ the military said: “We wish to make it abundantly clear that this is not a military takeover of Government.

“What the Zimbabwe Defence Forces is doing is to pacify a degenerating political‚ social and economic situation in our country which if not addressed may result in violent conflict.”

The military added that Mugabe and his family were “safe and sound and their security is guaranteed”.

Political analyst Professor Susan Booysen said Mugabe’s days as head of state could soon be over.

She said the action by the country’s soldiers was an interim measure to bring some form of “political reality”.

“We don’t know how it will play out but it seems as if Robert Mugabe’s political days are over‚” Booysen said.

She said it is possible that the military will give him an opportunity to announce that he is stepping down.

“It seems as if it’s a coup by any other name. It’s clear the military has stepped in and assumed power. It’s a question of the military taking over by using the force they have.”

“It’s already confirmed Mugabe is under house arrest. There is uncertainty as to where Zimbabwe will be going from now because the military are part of the old estate ... Will they allow free elections‚ and by when? Mugabe has been removed but prospects for democracy are not clear‚” Mathekga said.