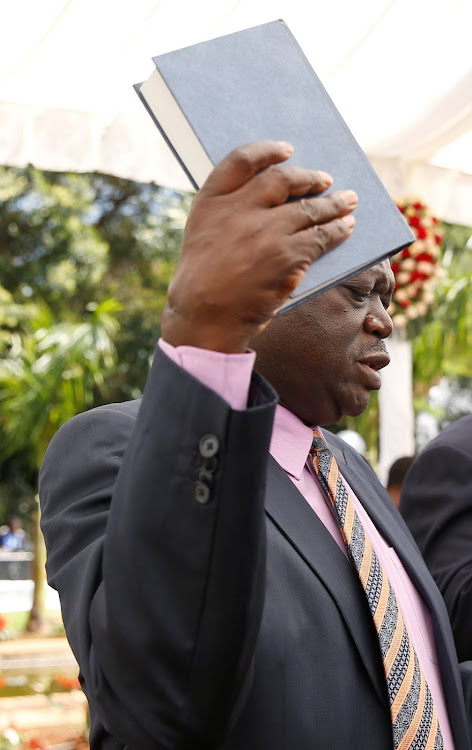 Zimbabwe's agriculture minister, Perence Shiri, has ordered businessman Robert Zhuwao, son of Robert Mugabe's younger sister Sabina, to vacate a farm that was allocated to him in 2004.
Image: REUTERS/Philimon Bulawayo

But a recent letter of notice — sent to Zhuwao by the ministry of agriculture, water, climate and rural settlement — orders him to cease operations and vacate the land.

“Following the notice to withdraw your offer letter, please be advised that the minister of agriculture, water, climate and rural settlement [Perence Shiri], you are required to wind up all or any operations that you may have commenced,” reads the letter.

Zhuwao told TimesLIVE that the farm is one of the best equipped in the country.

“The farm is an integrated hybrid cropping and livestock enterprise using state-of-the-art technology that we have been introducing since we were allocated the farm. It was structured to produce a special breed of quality beef cattle weaners for new farmers who need fast-growing but hardy and resilient cattle,” he said.

He added that it also has a thriving tobacco cropping system.

“We were among the pioneers of hydroponic floating-tray technology for tobacco seedling production. We became so competent at it that the Tobacco Research Board would regularly visit us to see what innovations we were working on. We even had a technical delegation visit us from Iran to learn about tobacco seedlings production using deep water culture hydroponics.”

Zhuwao added that the farm was capitalised through bank loans, which were offset by profits from productivity.

“We financed our operations from bank loans, which we consistently paid back — despite the various disturbances that we encountered,” he said.

“We have over 1,000 overhead sprinklers units, which can irrigate 150ha. We also invested in centre pivot irrigation equipment for 187.5ha. Due to the continuous requirements for electricity during tobacco curing, we have 230 KVA standby generation capacity.”

Zhuwao opted not to return to Zimbabwe after the November 2017 coup, which took place while he was away on state business in Argentina.

Like his colleagues Prof Jonathan Moyo and Savior Kasukuwere — the leading lights in the G40 faction — he fears persecution at the hands of President Emmerson Mnangagwa.

He is now exiled in SA, where he is studying for a PhD.

“Given the pettiness of Mnangagwa, I had taken the personal view that my extensive experience is beneficial to academia within Africa. Consequently, I am currently doing doctoral research with the Wits Business School's chair for digital business, focusing on digital agriculture,” he said.

Zim vice-president wants US$245,428 in divorce, says wife can have saucepans

Vice-President Constantino Chiwenga is willing to let his estranged wife Mary Mubaiwa get all their kitchen utensils, a bed and three cars in their ...
News
2 years ago

The EU wants to engage the African Union, SADC and key financial institutions this year in a bid to get Zimbabwe’s main rival political parties ...
News
2 years ago