WATCH | 'Kiss! Kiss!': This Shoprite proposal will have you in your feels 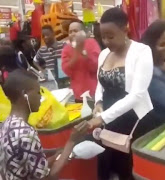 Image: Twitter/@Jabu1Anu The proposal that will get your heart feeling all warm.

A man won more than the heart of his now fiancee - he also won the hearts of shoppers and cashiers when he proposed to his girlfriend in a crowded Shoprite store.

The proposal was captured on video by one of the shoppers and has since gone viral across social media platforms.

Crowds of excited people can be heard cheering "kiss! kiss!"as the man puts a ring on his girlfriend's finger as the seemingly overwhelmed woman accepts the proposal.