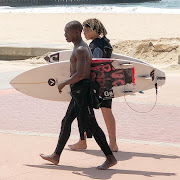 “His journey was not yet complete.”

These were the sombre words of Surfers Not Street Children founder Tom Hewitt on learning of the tragic death of one of his protégés, 16-year-old Mxolisi Gwamanda, who was stabbed on Tuesday.

“He absolutely loved surfing; it was his escape from the street life,” said Hewitt.

The circumstances that led to Mxolisi’s stabbing in the streets of Durban's Point area are unknown at this stage, but Hewitt believes it was over a small disagreement.

“His journey was not complete. We were in the process of permanently getting him out of the streets,” Hewitt told TimesLIVE.

Mxolisi had been in the Surfers Not Street Children programme - which works to enrich the lives of street children through surfing - for about three years and has been described as someone who was well loved and very helpful.

“He was at our facility almost every day. I have a picture of him and my son walking along the beach and my son was devastated to hear about this. The whole family was,” he said.

“The passing of Mxolisi is what makes us do what we do: to try and help as many children as we can,” he added.

Devastating news. So sad to report that Mxolisi (left) and known as ‘Wrong Turn’, one of the older kids in our program...

Posted by Surfers Not Street Children on Tuesday, 14 May 2019

Hewitt said that they were still trying to get in contact with Mxolisi’s family.

KZN police spokesperson Colonel Thembeka Mbele said that a suspect had been arrested in the case.

“A case of murder was opened at Point police station for investigation. Police arrested a 24-year-old suspect and he was charged. He appeared in the Durban Magistrate's Court today [Thursday]," said Mbele.