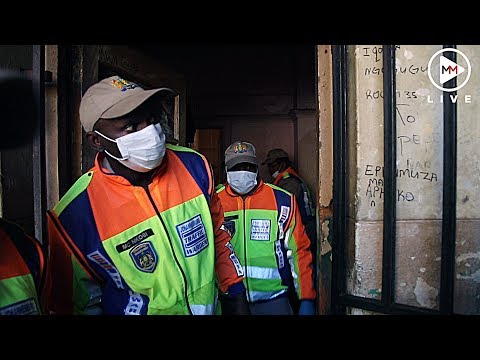 More than 100 people were taken in for questioning as authorities raided "hijacked" and problem buildings in Hillbrow and the Johannesburg CBD on Wednesday.

Several people rounded up for questioning were surprised by the arrests.

Their building was one of several raided during an integrated "bad buildings" operation carried out by Johannesburg metro police, SAPS, Midvaal traffic police and a security company.

The aim of the raids was to weed out criminal elements and determine if municipal by-laws are being contravened.

Image: Ernest Mabuza Rubbish piled up outside Vannin Court in Hillbrow where a joint law enforcement team conducted a raid on Wednesday June 12 2019 in an operation to rid the area of criminals.

Some of the 37 men who were put into the back of a police vehicle for profiling claimed that they had been asleep in their rooms in a block of flats raided on the corner of Esselen and Edith Cavell streets.

The men demanded to know why they were being forced to sit outside the building before being taken to the police vehicle.

One of them, who gave his name as Sipho, said he had been asleep after working a night shift as a security guard.

Another shouted from inside the police vehicle that he needed to get back to work later in the afternoon.

Metro police spokesperson Wayne Minnaar said a gun was confiscated in the building and one person was arrested for being in possession of ammunition.

Inside Vannin Court on Kotze Street, a search yielded four Okapi knives, a pair of scissors, an axe and a machete. No drugs were found. Police took 57 people in for questioning.

Vannin Court is one of the buildings that Johannesburg mayor Herman Mashaba has described as a city-owned property hijacked by slumlords.

Mashaba said hijacked buildings were a major problem in the inner city‚ with people living in deplorable conditions and being abused by slumlords who extorted money from them.

He said at Vannin Court it was found that "residents" were renting beds in the flats for amounts ranging from R250 to R1,200 per person.

Following the raid, a woman stood outside Vannin Court complaining that police had broken down her door instead of knocking.

Inside the building, sewage spilled into the hallways and rubbish was piled up.