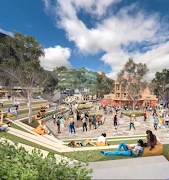 Image: Supplied An artist's impression of one of the proposed student precincts that are to be developed in the Johannesburg inner city.

Second-year public relations student at the University of Johannesburg (UJ), Tshegofatso Maake, walks about 2km daily from Brixton to UJ’s Auckland Park campus to attend classes - simply because she could not find accommodation on-campus.

Maake is among more than 20,000 UJ students who are living off-campus because the university only has the capacity to accommodate just under 7,000 students on-campus.

UJ is not alone in this problem; student accommodation is a challenge facing all institutions of higher learning across the country.

Wits University said it faced the same challenge, as demand for accommodation outstripped the number of beds available.

"Wits received approximately 14,500 applications for accommodation and its residences cater for approximately 6,500 students," the university said.

It added that it was having ongoing discussions with various stakeholders in order to find a sustainable solution to the student accommodation shortage.

In 2017, the Heher Commission - which was established by former president Jacob Zuma to establish the feasibility of free education - found that there was a severe shortage of student accommodation across the higher education and training sector.

This is the approach that the City of Johannesburg is now adopting.

Maake hopes that the development will bring much-needed relief to students like her and that they are afforded an opportunity to have suitable student accommodation.

City of Johannesburg spokesperson Nthatisi Modingoane said the city had established a process to form partnerships with all the institutions of higher learning that were within the city’s jurisdiction in order to foresee a smooth and effective implementation of  the resolution taken by council in November 2017, regarding student accommodation.

Modingoane said rental fees charged for student accommodation would be capped at R3,500 per month (as per the National Students’ Financial Aid Scheme allowance).

“Moreover, in our engagements with the awarded developers, Joburg Property Company (JPC) has ensured that all development plans geared towards the provision of affordable student accommodation, are in line with the gazetted policy on the minimum norms and standards for student housing at public universities,” he said.

Modingoane said that at this stage the city was unable to give definite numbers on how many students would be accommodated.

Maake, who is originally from Mpumalanga, currently lives off-campus in Brixton, where she said the conditions were not really suitable for students.

"There’s lots of taverns around the street where I rent and makes it hard to study at night," she told TimesLIVE.

UJ spokesman Herman Esterhuizen said the accreditation of buildings was done by the university on application by the buildings’ owners, and was subject to various criteria and requirements. He said most students who were affected by the shortage of student accommodation were senior undergraduate students.

Wits SRC deputy president Nkateko Muloiwa welcomed the release of properties and said he hoped it would bring an end to the tough conditions some students found themselves living under.

"Students sleep in the libraries, other are illegally squatting with their friends, while the others just sleep in any corner they find in the university," Muloiwa said.

He said he hoped the released properties would be NSFAS accredited and restore much-needed dignity to students who were presently living in squalor.

"Students from poor families are living under very bad conditions. If your parents don’t have the R40,000 (per annum) for private accommodation then you are in trouble."

In April, the Gauteng government signed a memorandum of intent with Wits for the release of five properties to meet student housing and research needs.

The properties are around Constitution Hill and are part of the Gauteng Provincial Government Rapid Land Release Programme.

"We hope the buildings will be ready by next year when the academic year opens and believe they will also assist in providing student accommodation," Muloiwa said.

The city released an additional 17 developments in the Orange Grove area, which are intended to create more affordable student accommodation.