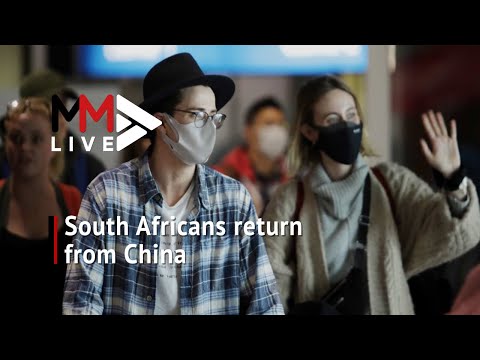 It may look like science fiction, but South Africans are quickly getting used to the spectacle of passengers passing through doors at airports wearing masks, as the deadly novel coronavirus holds the world in its clutches.

At Cape Town International Airport on Wednesday, dozens of travellers were reunited with loved ones as they unmasked themselves after overnight flights from China and nearby locations.

Many said it was a “relief” to be home after being in China - parts of which are under lockdown - and that the seriousness of the outbreak pervades every conversation on Chinese soil.

Image: ESA ALEXANDER/SUNDAY TIMES Passengers arrive from Hong Kong at Cape Town International Airport, on January 29 2019, after being screened by health officials following the outbreak of the coronavirus in China.

Kayleigh Smuts, a young English teacher from Cape Town who has a contract in Shanghai, told TimesLIVE, “I feel relieved to be home, honestly.

“I thought we would take our masks off to eat on the plane but people didn’t. Everyone just wants to get out of there. I am so glad to be back home. You get screened if you go to any public place. It is not fun.”

She said Shanghai’s lockdown wasn’t as extensive as at other places but, even so, they felt as if they were being monitored wherever they went.

“If you have to stay indoors, then there is no point in being there,” she said, adding that she and the other teachers from Cape Town were due to return to China in February but would have to monitor the situation.

“We have been watching and monitoring the outbreak every day,” said passenger Dicky Julius, who also arrived in Cape Town on Wednesday. “China is on high alert. We can attest to that - they are not taking it as a joke. Every time we go out or come back, our temperature is taken. But on the international flights you see people aren’t taking it seriously enough. That is my concern.”

Travelling with him was Elrick Julius. Still wearing his mask, he told TimesLIVE, “I am just back from Beijing. That virus - dis woes, mense. It is deadly, not a word of a lie, people are dying like flies. If you go there, protect yourself and keep an eye on the facts and figures.”

Meantime, the Endangered Wildlife Trust has welcomed the decision by Chinese authorities to ban the trade of wild animals, and has called on the government to “make this a permanent rather than temporary ban”.

The Chinese Centre for Disease Control and Prevention tested 585 samples of wildlife specimens present at Wuhan's Huanan Seafood Wholesale Market during the course of January and found that 33 of these samples contained the coronavirus.

“In this market, as in so many throughout China, customers could purchase carcasses and live animals from local and international origins. African animals, such as crocodiles and pangolins, are on offer,” the Endangered Wildlife Trust said.

It also cautioned: “Disease is not the only danger consumers face from wildlife products. In Africa, many of the animals that end up in the trade chain are killed using highly toxic pesticides. Residues of these poisons have been detected on animal parts from vultures, leopards and a range of other species.”

In Johannesburg on Wednesday morning, SA health minister Zweli Mkhize held a press briefing at which he said that his department has enough contingency measures in place should the deadly disease hit South African soil.

“SA has not reported or suspected cases to date,” Mkhize said. “And research into the epidemiology of the virus or natural history of the virus is ongoing.”