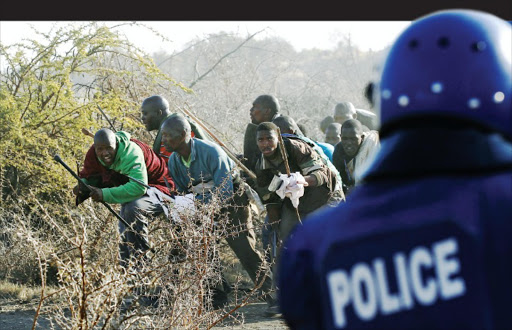 The lawyer representing the Lonmin mineworkers who were shot dead, injured and arrested says his clients are still awaiting compensation.
Image: Reuters

It has been eight years since the deadly wage-related strike by mineworkers at Lonmin's platinum mine in Marikana, Rustenburg.

Since then, more workers have died as a result of the shooting.

This is according to lawyer Andries Nkhome, who represents the 279 mineworkers who were either injured or unlawfully arrested during the strike that resulted in 34 mineworkers being shot dead.

Nkhome said at least four mineworkers who were due to receive compensation from the government for the injuries they sustained have since died.

“None of those who suffered injuries have been paid thus far, and we have had a few pass away. There are some people who died, in our view, as a result of the trauma they suffered at the scene. In time, we will end up having fewer of the people we represent alive.”

Ten other people, including security guards and police officers, were killed in the days before or after the incident which came to be known as the “Marikana Massacre”.

Speaking to TimesLIVE on Friday, ahead the August 16 commemoration, Nkhome said only some of those who were arrested had been compensated by the government.

“The expectation was that we would have first settled the injured because they are the ones who require medical attention. Thereafter, we would we go to the ones who were arrested unlawfully,” he said.

In the meantime, Nkhome said, many of his clients continued to live with pain and suffering.

Lawyer Andries Nkhome says of his conversations with one Lonmin mineworker who survived the August 2012 massacre.

“There is, for example, [Mzoxolo] Magidiwana, who was shot nine times at close range. He is still alive though he complains about pains and anguish. Sometimes he calls in the middle of the night and says 'I cannot believe I’m still alive',” Nkhome said.

“We also have [Lungisile] Madwansi, who has  a bullet lodged in his body. He is alive and hasn’t received a cent from the state. The best that we can do is just encourage them to hang in there.

“Let’s hope the state turns its heart around and things are settled and they can have their consultations with doctors that will make sure their lives are better. Obviously we know those lives cannot be returned to what they used to be before they were shot.”

Nkhome said though it had been a long wait for his clients, they were not surprised it was taking this long.

“The state has always been dragging its feet. After the massacre, the state tried to put the blame on the shoulders of our clients, the injured and arrested. Fortunately, we were able to get into the fray and paint a proper picture in relation to what happened,” he said.

Nkhome said they were proceeding with an application to review the decision of the then-director of public prosecutions, Shaun Abrahams, to criminally charge the mineworkers.

“Once we win that battle, we will move on to making an application of review of the recommendations made by judge Ian Farlam,” he said.

Farlam chaired an inquiry into the Marikana killings and completed the report  in 2018.

SA is not getting the answers it deserves, says Marikana judge Farlam

Seven years have passed since the Marikana deaths, yet victims of the bloodiest massacre South Africa has seen since the turn of democracy have yet ...
News
2 years ago

Honour Marikana fallen by reviewing police methods that killed them

Marikana is a permanent blot on our young democracy, one that can never be erased from our country's history.
Opinion & Analysis
2 years ago

August 16 marks the day 34 mineworkers were shot and killed by police during protracted protests for better wages.
Politics
2 years ago