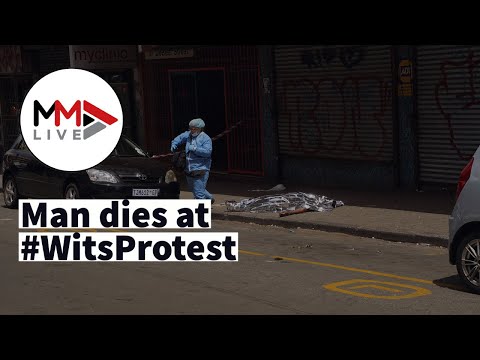 A Wits student led protest in Braamfontein turned tragic on Wednesday after a bystander was allegedly shot by police officers attempting to disperse protesters.

Though officers were reportedly using rubber rounds, the victim was allegedly shot twice at point-blank range in the chest. He succumbed to his wounds at the scene.

The students are protesting against historical debt and the subsequent inability to register for the university year. Student protesters remained at the scene of the killing, peacefully protesting the earlier violence.

As the forensic pathology vehicle came to pick up the body, protesters gathered and gave the vehicle a powerful send off, eventually leading the body through a block of upper Braamfontein.

Students later clashed with police as stun grenades were reportedly set off on Empire Road, close to the university.

According to Wits, two students were injured and three were detained and taken to Hillbrow police station.

The students have vowed to continue the protest and have called on other students nationwide to join in the struggle.