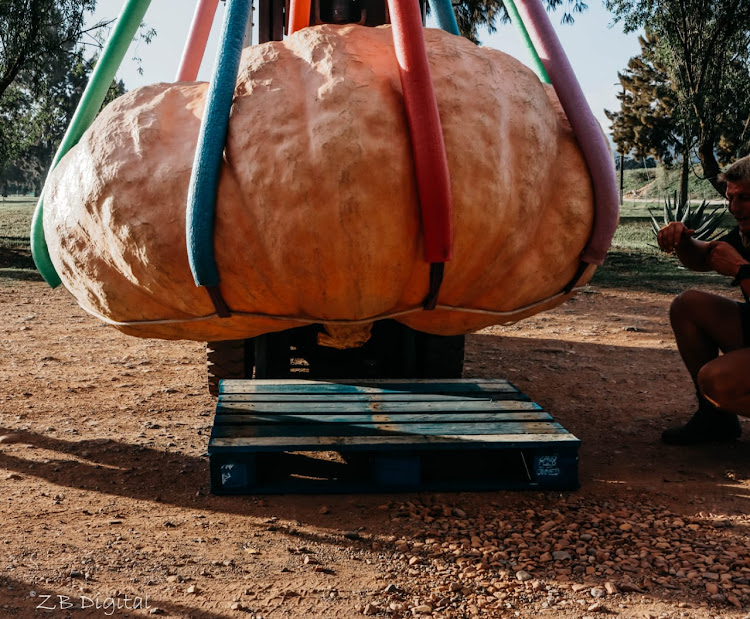 A vegetable grown outside Willem le Grange’s Mossel Bay home has become a record-breaker after weighing in at a massive 867.5kg.

Le Grange won the first prize of R17,500 and an additional R50,000 for breaking the SA record at the Giant Pumpkin Festival.

However, SA’s biggest ever recorded pumpkin nearly didn’t make it to receive the honour when an animal-related drama struck.

“A month before the weigh-in there was a porcupine,” Le Grange said. “It came into my patch and bit my pumpkin twice. I was scared it was going to rot, but I disinfected it and it healed quickly. If I had not given it attention, it would have rotted.”

The festival took place on March 26 and 27 in Heidelberg in the Western Cape. It was the 12th year the event was held, but due to Covid-19 only 250 people were allowed to attend each day.

“I will have to open a pumpkin account and keep the money and spend it on pumpkins,” Le Grange laughed. 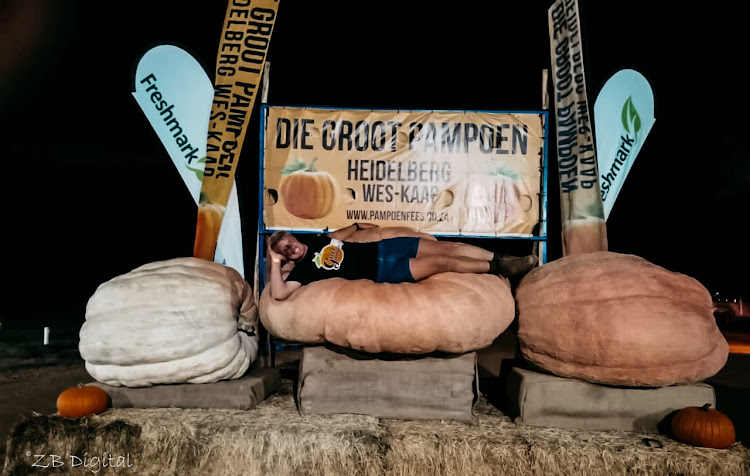 The 33-year-old winner said he saw big pumpkins in Heidelberg next to a road when they were placed there after the festival and he developed an interest.
Image: Supplied

“I grew five plants and was lucky to harvest all five, which is not how it usually works through the season because you lose a few pumpkins,” Le Grange said.

Le Grange said he will harvest the seeds of the two biggest pumpkins at the festival.

“One pumpkin has become livestock food while two are at Laerskool Hartenbos for fundraising and to make children more aware there are bigger things in life than your average pumpkin in the kitchen,” he said.

You can’t just put the seed in the soil and think there is going to be something at the end of the season.

The 33-year-old said his pumpkin, which took 170 days to grow, was named “Tornado” after a rat poison because he had an encounter with mice while growing the it.

“There were a lot of mice and they eat your pumpkins. I bought a pack of mouse poison  and that was the name of the product. One Sunday I was sitting next to the pumpkin and couldn’t decide on a name and then I  saw it on the box.”

Born and raised in Burgersfort, Limpopo, Le Grange moved to the Western Cape four-and-a-half years ago. He is a farm manager at Ruiterbosch Agri outside Mossel Bay.

He said he first saw big pumpkins next to a road in Heidelberg where they had been placed after the festival and developed an interest.

“I started finding out more about pumpkins and where to get seeds and did my own research. This is my second season growing pumpkins. In 2018 I grew a pumpkin that weighed 435kg. This was my second time and it was a little bigger.

“I learnt a lot from the mistakes I made this season. You are never too old to learn.” 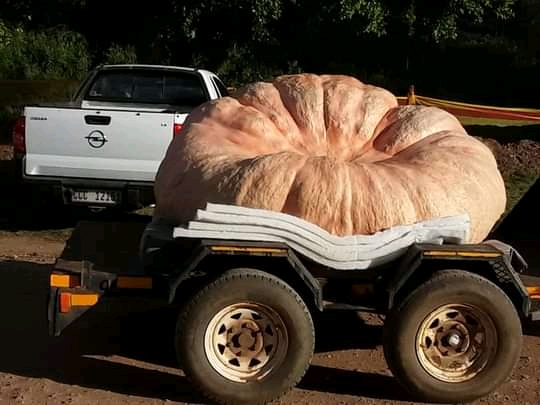 Le Grange’s advice for pumpkin growers is that “your footprints are the best fertiliser”.

Kretzen said the first three winning pumpkins are cut up very soon after the weigh in so  the seeds can be harvested and dried to be handed out in September to growers.

One of the rules is that the winning pumpkins must be edible.

Kretzen said the festival was for the community, for entertainment and for raising funds.

“We can only do this with the support of our sponsors,” she said.

Editor's note: The original version of this story said that the prize money was R175,000 for the winner based on information incorrectly provided by event organisers. The error is regretted.

Trouble was fermenting in the wine industry long before lockdown

The loss of more than 2,000 growers and full extent of uncontracted stock cannot be blamed fully on the pandemic
Lifestyle
1 year ago

Growth in agriculture unlikely to benefit all

Will Bekkie squash upstart at this year's Giant Pumpkin Festival?

If you thought pumpkin was just a vegetable, think again. For Peet Joubert, a construction foreman and part-time giant vegetable grower from ...
Lifestyle
2 years ago