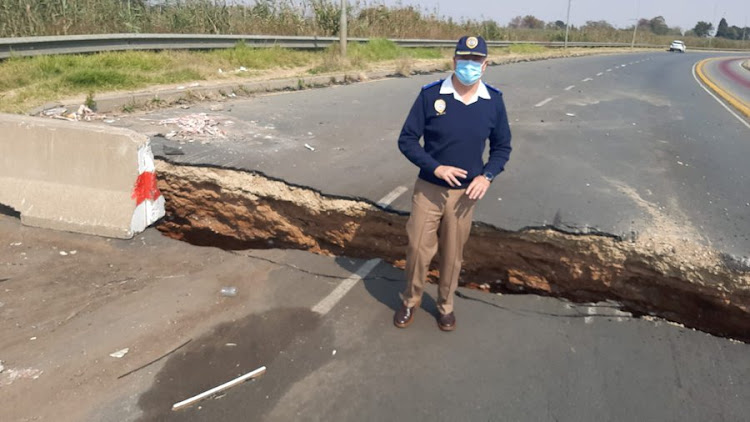 A metro police officer demonstrates the severity of the damage to the road in Soweto. Both lanes have been closed and motorists are using the Rea Vaya lane.
Image: Twitter: Joburg Metro Police Department (JMPD)

Collapsing infrastructure and heavy downpours have led to the closure of two major roads in Gauteng and the Western Cape.

The Johannesburg Roads Agency has announced the closure of a section of Klipspruit Valley Road in Soweto due to a sinkhole.

The agency said in a statement that stormwater infrastructure had collapsed, causing the road to cave in. Two lanes were affected.

“Plans to repair the stormwater and road infrastructure are under way and further developments will be communicated in due course,” it said, adding that traffic had been diverted to the Rea Vaya Bus lane.

Motorists in Johannesburg have also reported a sinkhole on the M1 north just after Booysens but the road has not been closed yet.

Some roads were washed away after heavy downpours lashed parts of the Western Cape last week.

The rain saw some residents being evacuated from their homes. The road linking Robertson to Bonnievale collapsed in the Langeberg municipal area.

Driver ‘saved his son’, then he escaped as SUV was swallowed by sinkhole

The man whose SUV was photographed protruding from a sinkhole last weekend “saved” his nine-year-old son after the road suddenly collapsed, leaving ...
News
1 year ago

Heavy rain and stormwater lead to road collapse in Mpumalanga

A road battered by heavy rain and stormwater has collapsed outside Mbombela in Mpumalanga.
News
1 year ago

Two weeks ago, David Watkins noticed that his lawn appeared to be sagging beneath his pool house. He poked the soil with his finger and his entire ...
News
1 year ago