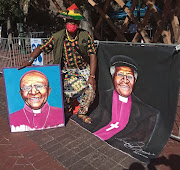 Sirenje, who is renowned for painting portraits of prominent South Africans at their funerals, enthralled mourners with two paintings of the Arch on Friday morning. Scores of people took turns to pose for pictures with Rasta. He is often criticised for drawing pictures dissimilar to the actual person.

“I always paint the fallen legends, so I found it befitting to come all the way from the Johannesburg,” said Rasta. “As an African, I am from Zimbabwe and my father is Mozambican, I had to come here. He (Tutu) also coined the phrase ‘rainbow nation’.”

Rasta said he took the criticism in his stride. He said he received threats before he drew the painting of the late Zulu monarch, King Goodwill Zwelithini KaBhekuzulu.

“It is not easy to sit in front of mourners and paint the deceased,” he said.

“I think it also depends on my feelings when I am painting. I have received a lot of threats. I was told not to draw the late Zimbabwean president (Robert Mugabe). Even before I did the painting of the king, I received voice notes on my phone saying that I must not go to KwaZulu-Natal as they would skin me alive. But I just went there, I was brave.”

He said South Africans have embraced him and his work.

“South Africans love me. I haven’t had any problems from them,” he said. “You can look at my Twitter account, people threaten me, but when I go out they show me love. My paintings are different, just like music. I am not shooting  a picture when I draw, I infuse the person’s character into the painting.”

He said he hoped to hand over one of the paintings to Tutu’s family.

He said he is also going to paint one, live, during the funeral.

Most of the mourners showered Sirenje with praise. Some said his paintings “resemble the Arch”. He also received praise on social media. Sihle Mpanza Dube wrote on Facebook: “U nailed him Rasta, maybe he's your father that's why.” Nozipho Lerato Tricia posted: “This is an improvement from the one you did on his birthday last year.”