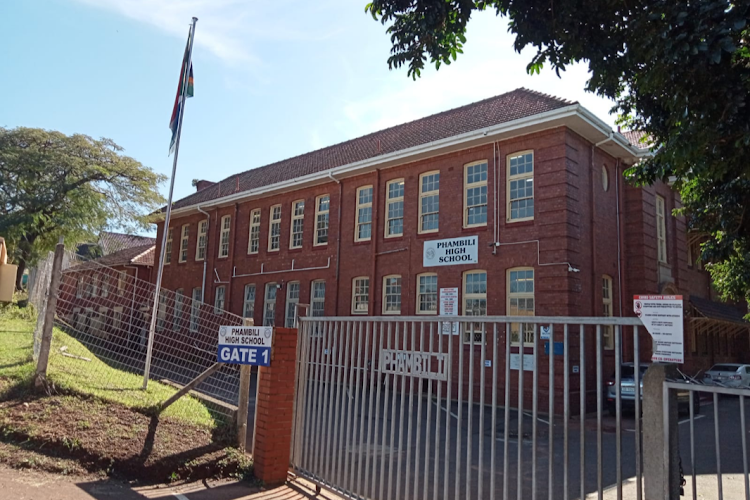 An armed teacher at Phambili High School in KZN has been suspended.
Image: Mfundo Mkhize

A gun-toting high school teacher, who allegedly pointed her gun at pupils because they were unruly, has been placed on suspension by the KwaZulu-Natal education department.

The department made the decision after investigating claims by angry parents of pupils at Phambili High in Rossburgh, Durban, that the teacher carried a gun to school and was intimidating their children.

Nathi Ngcobo, head of department at the provincial education department, said: “I can confirm the teacher from Phambili High School in the Umlazi District, who has been pointing a gun at pupils and accusing them of being rebellious and making a noise, has been put on suspension by the department, pending disciplinary proceedings that are going to be instituted against her.

“We condemn this kind of behaviour from anyone employed by the department, worse if it is a teacher.

“It is behaviour we don’t want emulated by our children, who look up to their teachers as role models.

“That is why we are dealing decisively with this case,” said Ngcobo.

The KwaZulu-Natal education department is probing allegations by parents of pupils at a Durban high school about a gun-toting teacher who often ...
News
1 month ago

A school teacher, who was approached for comment but is not authorised to speak to the media, said the teacher had not been at the school this week after a group of angry parents demanded she vacate her position.

Parents who spoke to TimesLIVE said the teacher had "wielded power" at the school which at times strained her relations with the principal.

Earlier this month, five parents convened a meeting aimed at dealing with the teacher’s misconduct. The teacher is alleged to have stormed the meeting with bodyguards.

“This issue has dragged on for some time. That’s why we are unequivocal in calling for her sacking,” said one parent.

The meeting prompted parents to stage a five-day picket on the school premises. While this was going on, some parents wrote a letter to a high-ranking official in the local district of the department.

The official told parents the matter was receiving the attention it deserves.

“The official told us what the teacher was allegedly doing was at odds with how things should be at a school. He said the matter had been escalated to the head of the department,” said a parent.

In 2018 TimesLIVE reported that Phambili High pupils allegedly went on a rampage, destroying a disputed property across the road. They claimed at the time that 10 families‚ who they accused of being illegal tenants‚ did not want to vacate the property so four classrooms could be built there.

In 2014, the principal at the time and one of his teachers were caught on camera beating pupils for arriving late.

Durban metro police have denied allegations of brutality after an incident at a city school.
News
1 month ago

KwaZulu-Natal education MEC Kwazi Mshengu has commended a group of pupils and community members for standing up against a cable thief.
News
1 month ago