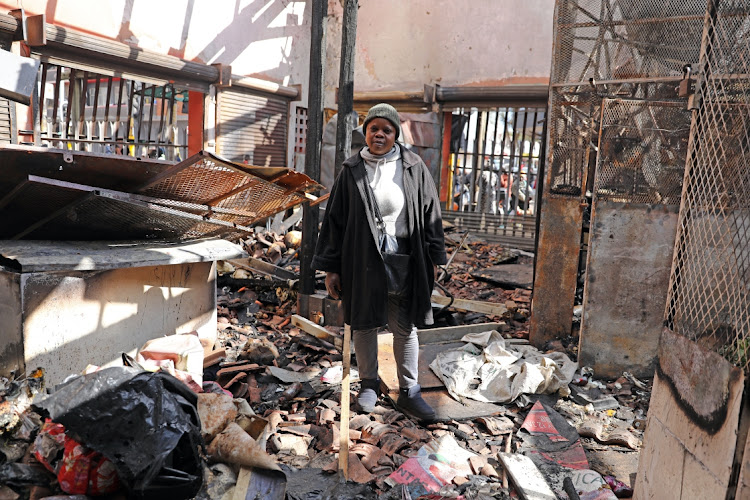 Solange Mayamba is desperate for help after she lost her stock in a fire that rampaged through stalls at the Yeoville market.
Image: Thapelo Morebudi

When Solange Mayamba received a call that her stall was among those that burnt in a fire at the Yeoville market, all she could think about was her children.

The mother of three from the Democratic Republic of the Congo received a call about the fire at the market in the early hours of Tuesday morning.

She rushed to the site and couldn't believe what she found.  She helplessly watched her stall burn to ashes along with all of her stock.

“When I arrived I couldn’t save anything. Everything had burnt to ashes,” she said.

Mayamba, who started her food business at the market in 2016, said it was a means to daily survival. She bought her stock on credit and paid her suppliers back after making sales..

Like other traders, she kept everything inside her stall.

“I don’t know how I will survive with my children. I pay rent and now my shop is burnt. I don’t know what I will do,” she said, emphasising that besides her rent outstanding, she was now in debt to her suppliers.

Mayamba said since she moved to SA about 14 years ago, she has never experienced such a tragedy.

“I don’t know whether the government will help — my children need food. We need money to pay rent,” she said. 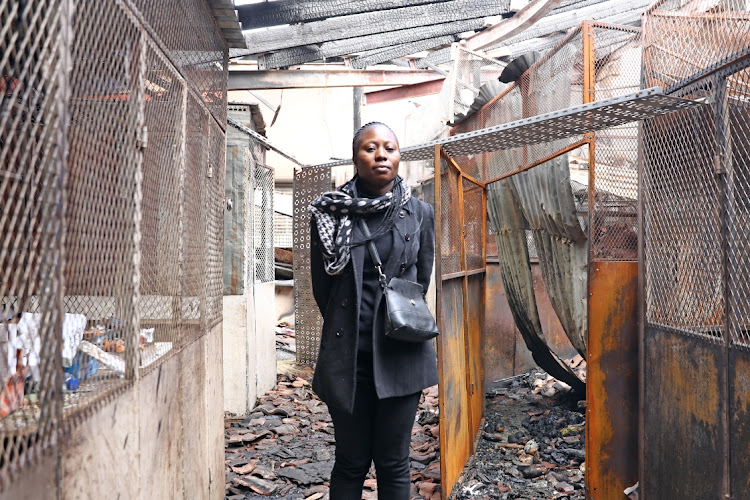 Giselle Kinzunga plead for help after she lost her stock in a fire flames that ravaged stalls in Yeoville Market.
Image: Thapelo Morebudi

Business owners blamed the blaze on members of Operation Dudula who they said had threatened them on Monday.

“They say all foreigners must leave. They say we must leave and give people of SA our stalls,” said Mayamba. 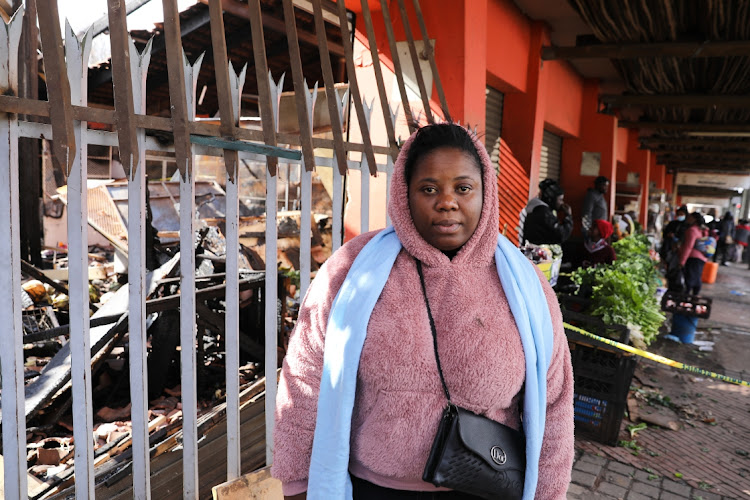 Onela Luvudu plead for help after she lost her stock in a fire flames that ravaged stalls in Yeoville Market.
Image: Thapelo Morebudi

She told TimesLIVE that members of Dudula went to the market and stood on the side of the road on Monday afternoon holding placards and singing.

“They started to threaten people standing outside. They were singing and swearing and they told us that we would see what was going to happen,” said Luvudi.

She said the group clashed with some EFF members who outnumbered the Operation Dudula group and stood in solidarity with the foreign stall owners.

“The EFF came, those people who support Malema, and they told us not to worry and promised that nothing will ever happen,” she said.

She said after the incident Dudula members left but not before they threatened stall owners.

This was not the first threat from supposed Dudula members.

On June 11 and 12, the market had been closed after a group supposedly belonging to Operation Dudula visited the area and allegedly told traders that they wanted to reclaim the market from foreigners.

“They said they want all those foreign mamas to leave the market,” Luvudi said.

The case against six people charged with public violence after clashes between the Dudula movement and foreign nationals in Alexandra, Johannesburg, ...
News
1 month ago

She and her sisters did not know how they were going to rebuild their business. They had recently stocked up but left all of it in their stall, which was destroyed.

She said the fire occurred when most of the stall owners had just received their stock.

“It is not easy. It will cost a lot of money since everything is damaged. We are selling African food. One 50kg bag of beans cost us R6,000. It is very expensive and when the fire started the new products had just been delivered.

“We are anxious. For now, we don’t know if we can start our businesses again. Even if we have the money we are scared. Let’s say maybe we manage to get the products again and put them here, what will happen if they come again, we will lose,” she said.

Giselle Kinzunga couldn’t speak for too long and only pleaded that the government would intervene and assist them.

“We don’t know what we are going to do, it’s approaching the end of the month and we need to pay rent — and if we don’t,  they will evict you,” she said.

“Operation Dudula is fighting to reclaim the economy back to its rightful owners, South Africans. We always preach that we do not destroy our infrastructure, therefore we cannot be promoting vigilantism,” she said.

Dabula advised it was best to wait for the report of the investigations into the fire and would not be drawn into whether her members were behind it.

“If any of our members are involved then they have done it in their personal capacity and the law should take its course,” said Dabula.

“Police received a phone call from an anonymous [person] saying Yeoville market is on fire. On arrival at the market, the police found firefighters extinguishing fires at about five stalls that were still burning. The cause of the fire cannot be confirmed at this stage.”

Advocacy group the African Diaspora Forum said it was seeking clarity on the origin of the blaze, which had affected many foreigners. The group said it had heard two stories about the blaze — one being that it was a xenophobic and another that it was sparked by an electrical appliance.

Johannesburg emergency management services spokesperson Nana Radebe-Kgiba said the cause of the fire could not be immediately determined due to the extent of the damage.

Movements such as Operation Dudula make life even worse for the countless number of people in SA who, through no fault of their own, have no ID ...
Opinion & Analysis
1 month ago

Holocaust experts in SA have sounded the alarm over similarities between the rise of xenophobic sentiments in the country and genocides throughout ...
News
1 month ago

Operation Dudula introduced a group of young people who voluntarily offered to help affected communities and rebuild the province despite allegedly ...
News
1 month ago

Operation Dudula has long held that it is neither a xenophobic nor a violent movement and that it is being misrepresented by the media and certain ...
News
2 months ago