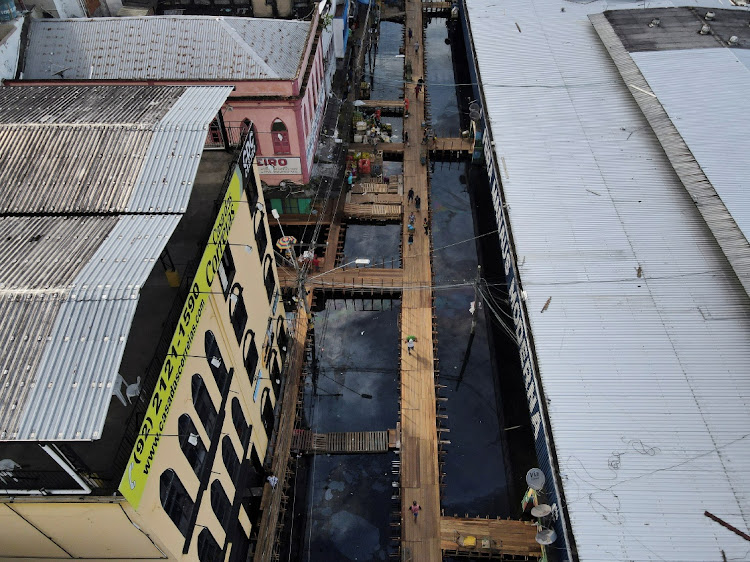 An aerial view of a street flooded by water from the Negro river, where people walk over wooden walkways installed by the city hall in downtown of Manaus, in Amazonas State, Brazil May 17, 2021.
Image: REUTERS/Bruno Kelly

Heavy rains in the Amazon rainforest have caused rivers to rise to near record levels, flooding small Brazilian towns and threatening the state capital Manaus with another disaster after it was severely struck by the coronavirus pandemic.

Across the state of Amazonas, more than 400,000 people have been affected by flooding, said the state's Civil Defense service, many of whom were evacuated as water levels climbed.

The Rio Negro river was rising by about 3 centimetres (1 inch) a day and on Monday streets in the centre of Manaus were already under water, according to city hall.

“The water level is... the third highest in the history of the city. If it continues like this, it will pass the record 2012 flood,” said mayoral spokesperson Emerson Quaresma.

While rainfall varies from year to year, climate change has brought particularly heavy rainy years and also very dry years that hurt farming, said Philip Fearnside, an ecologist at the National Institute of Amazonian Research in Manaus. Amazon deforestation may also contribute to long-term changes but does not affect rainfall year to year, he said.

Access to the Manaus market on the edge of the Rio Negro is underwater and the city has built raised wooden walkways for pedestrians.

Up the Amazon River, small riverside towns such as Anamã, population 12,700, have been totally flooded, forcing residents to raise the floor levels of their wooden houses or evacuate.

In Manaus, the homes of 4,700 families are in danger. Mayor David Almeida has offered them stipends to rent other dwellings if they are forced to evacuate.

Late last year, Manaus became an epicentre of the pandemic, making headlines as the city's hospital system ran out of oxygen for patients.

The city and surrounding region registered the first cases of a highly contagious variant of coronavirus, called P.1, that has spread rapidly throughout Brazil and to at least 10 other countries.