After a bruising six-day meeting‚ the ANC has batted most of the contentious issues such as land‚ the Mining Charter and its organisational design back to its branches.

While decisions at the national policy conference were not binding and subject to approval by the December national elective conference‚ factional divides prevented firm outcomes on many issues of contention.

There was a hard push from supporters of President Jacob Zuma for a decision on the redistribution of land without compensation‚ which would necessitate a change to the constitution.

But according to the ANC’s economic transformation subcommittee head‚ Enoch Godongwana‚ both this proposal and the current system of redistribution with compensation remain on the table for debate by branches. Zuma‚ however‚ hinted in his closing address that there could be legislative changes for expropriation without compensation.

“We agree that using the fiscus for land redistribution must be accompanied by other measures if we are to achieve the goal at the required pace.

“Where it is necessary and unavoidable this might include expropriation without compensation‚” Zuma said. 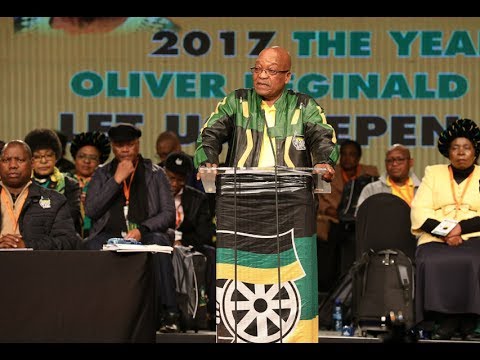 On the controversial Mining Charter‚ which among other things seeks to compel companies to maintain a minimum 30% black shareholding‚ Godongwana said there was no contest over the charter’s targets but on its design.

The rand took a beating on Wednesday after news emerged that the ANC was considering nationalising the South African Reserve Bank.

This‚ too‚ would be discussed by branches‚ along with a proposal for a wealth tax. There was also no agreement on proposals to change ANC leadership structures and election processes.

There had been proposals to increase the number of national officials‚ which would include a second deputy president and second deputy secretary-general. Zuma used his closing address to lobby for a proposal from his KwaZulu-Natal support base for the loser in the presidential race to automatically become deputy president.

“This is a remedy to kill factions in the ANC.

Zuma offered to go province by province to lobby for support for this proposal.

In his closing address‚ the president tried to project the perception that the ANC had emerged stronger and more united from the conference‚ despite the heated discussions and factional interests.

Zuma’s message was undermined minutes after he spoke from within his own faction when the ANC Youth League issued a statement expressing dissatisfaction on some of the conference outcomes.

The youth league is particularly unhappy that the majority of delegates rejected the phrase “white monopoly capital” as the “strategic enemy of the revolution”.

The youth league lashed out at the ANC leadership saying: “We are of the firm view that if the old guard at the helm of the organisation do not change their attitudes and the manner in which they conduct themselves‚ they will go down as the generation that liquidated the ANC and took the precious legacy of President Oliver Tambo into the dustbins of history.”