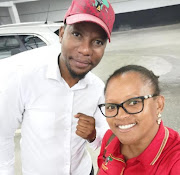 Mashego was responding to an allegation by former MEC of Human Settlements Dikgang Uhuru Moiloa at a prior sitting of the Alexandra inquiry on May 15, reports GroundUp. He said land occupations in Alexandra had increased since the EFF’s call to occupy land and this had made it difficult for the city to enforce by-laws and provide services.

Mashego was speaking at the third sitting of the inquiry into Alexandra by the South African Human Rights Commission (SAHRC) and the Public Protector’s office on Thursday. The EFF was invited to respond to Moiloa’s statements and clarify its stance on land occupations.

The inquiry follows a spate of protests in Alexandra township in April. Its purpose is to consider some of the issues raised during the protests, such as the lack of housing, water, sanitation and overcrowding in the township. The inquiry will also look into allegations of corruption in the Alexandra Renewal Project (ARP), a project initially worth R1.3bn, launched in 2001 to develop Alexandra.

Mashego said land occupations were part of the EFF’s mandate. She read from the party’s founding manifesto, which stated that the EFF would “demand land through occupations”.

But she said the increase in land occupations was not particular to Alexandra. Land occupations were happening across Gauteng because of the dire need for land and housing, she said.

“We are surprised by the question of why people are occupying land in Alexandra when the dire poverty is clear,” said Mashego.

She said people were occupying land out of desperation. “Every time people ask why they are not getting land, they are told there is no land. Yet they are living next to vacant land,” she said.

Mashego said that the city citing increasing land occupations as an obstacle to providing services was “an insult to all of us”.

“The ANC was democratically elected in 1994 and EFF was formed in 2014. People were still forced to occupy land in that time,” she said. “People are just looking for excuses not to do their jobs.”

Vusumuzi Dlamini, a panelist from the Public Protector’s office, said the concern was that some areas that were occupied were not suitable for housing development and posed a health and safety risk for the occupiers.

One such example is the land occupation along the Jukskei River bank in Alexandra.

Dlamini asked Mashego: “Before you embark on [land occupations] do you conduct feasibility tests so that it is practical for government to roll out bulk infrastructure in those areas?”

Mashego said the EFF did not have the resources to conduct formal assessments of the land before occupying. “If we had those resources, we would be running government … We use common knowledge and understanding,” she said. She denied that the EFF had called for land occupations in dangerous areas. She agreed that some occupiers were living in dangerous conditions, but said it was the city’s responsibility to find suitable land for people to live on.

Asked by inquiry panelist Princess Ka-Siboto whether the EFF would consider changing its approach to occupying land considering the force it is met with by the state, Mashego said: “We will intensify our struggle for expropriation of land without compensation … It’s not likely to get easier for anyone.”