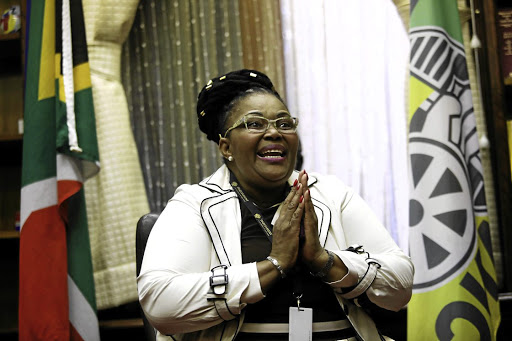 The ANC in parliament has promised to work with other parties to fast-track the amendment of sexual offences and domestic violence laws to ensure that harsher sentences are put in place for all crimes against women and children.

However, the party ruled out the return of the death penalty, saying the matter was not even “entertained” at its caucus lekgotla over the weekend.

The party's parliamentary bosses addressed journalists on Monday following the three-day lekgotla – a meeting held to draft a five-year programme of action for the sixth parliament.

“We don't want to be populist,” she added.

But the party wants the Sexual Offences Act and Domestic Violence Act to be speedily amended to allow for harsher punishment for perpetrators.

Majodina also defended - and reiterated - the call, first made by President Cyril Ramaphosa last week, for no bail for perpetrators of sexual crimes. She said that unlike the call for death penalty, this does not contradict the Bill of Rights.

“We are not talking about taking his life, but we are just saying that person must not enjoy the rights that are enjoyed by all other people. We need to strengthen those laws.

"While it is one's right to get bail, we are saying gender-based violence, as part of the national emergency … is not just an ordinary crime. Women and children have died and with the rate of these incidents, it cannot be business as usual,” she said.

“With this in mind, the ANC in parliament will work with other political parties to expedite the making of laws that will impose harsher sentences for all crimes against women and children," added Majodina.

The ANC said it supported calls for additional measures to be implemented immediately to halt acts of gender-based violence. These include:

Majodina explained that in terms of “the national emergency”, cases would be fast-tracked through the criminal justice system.

“We are saying there must be a turnaround plan that will say within six months, those cases must have been done. We must not wait for too long. Where there are no resources, we must dedicate resources to be able to deal with gender-based violence and femicide,” she said.

“If you act immediately, you send a message across to whoever was still planning to exploit, kill or abuse women. At the moment there is no turnaround time, gender-based violence is [treated] just like any other crime.”

On the ongoing spate of xenophobic violence, Majodina said the party was concerned as it put the country in a “very bad space”.

She said the ANC also wants a review of laws regulating access to the country and who trades within the republic.

“That will be our angle of debate tomorrow as the ANC - to say we must differentiate between xenophobic attacks as well as criminal activities. 90% of what is happening has everything to do with criminality,” she said.

76% of SA police stations without rape kits but shortage will be fixed: Cele

Police minister Bheki Cele has assured parliament that all police stations across the country will have sufficient rape kits by the end of next month.
Politics
2 years ago

President Cyril Ramaphosa has announced a host of measures against gender-based violence in the wake of protests against the increasing rate of rape ...
Politics
2 years ago

As slain University of Cape Town student Uyinene Mrwetyana was being laid to rest in East London on Saturday, about 3,000 people armed with ...
News
2 years ago