Law on party funding 'a good step' but must be improved: My Vote Counts 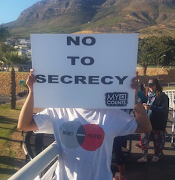 Image: Facebook/My Vote Counts The law will greatly improve transparency but the R100,000 threshold should be lowered as it is a lot of money that can still buy influence, says My Vote Counts.

The signing of the law giving people access to information about funding for political parties is an important step towards greater transparency and will also be an important mechanism to deter corruption.

This was the reaction of My Vote Counts on Friday after President Cyril Ramaphosa announced that he had signed the Promotion of Access to Information Amendment Act (PAIA) into law.

The law provides for the recording, preservation and disclosure of information on the private funding of political parties and independent candidates.

In a statement on Friday, the organisation said the act gives effect to the Constitutional Court judgment in the case of My Vote Counts versus the minister of justice and correctional services and another.

The 2018 judgment required parliament to amend the PAIA and to take any other measures it deemed appropriate to provide for information on the funding of political parties.

On Friday, My Vote Counts said it noted there was no commencement date yet for the PAIA Amendment Act.

The organisation said when the act is in effect, it will compel political parties and independent candidates to create and maintain records of all private donations received of more than R100,000 for a period of five years and release this information publicly on a quarterly basis.

“This is undoubtedly an important step towards greater transparency in the funding of our politics and will also be an important mechanism to deter corruption. However, the manner in which the PAIA Amendment Act was drafted, limits recordal and accessibility to the confines of a connected, but separate piece of legislation, the Political Party Funding Act (PPFA).”

My Vote Counts said in its submissions on the then amendment bill in 2019, it motivated for the R100,000 threshold to be lowered because "it is still a very substantial amount, out of reach of the vast majority of people, and smaller sums can still buy influence".

“We also noted that multiple donations of each less than R100,000, but cumulatively in excess of R100,000 could be made by the same person or company in a financial year, but these donations would not have to be disclosed, which allows secrecy to be maintained and undermines the purpose of the legislation,” the organisation said.

The organisation had also raised the issue of the definition of what constituted a donation. It argued that certain types of donations could still be concealed unless the then amendment bill expanded on the definition contained in the PPFA.

My Vote Counts said a number of other civil society organisations had raised similar concerns.

“It is unfortunate to note that one and a half years after signing the Political Party Funding Act, the president still has not signed the commencement date for this act to become effective.

“Until both the PPFA and the PAIA Amendment Act are operational, we will still do not have access to this crucial information.”

My Vote Counts said with the local government elections only a year or so away, it is asking Ramaphosa to sign the commencement dates for both laws.

It said this will allow the South African electorate to finally know who funds political parties and independent candidates, and to have this information before going to the ballot box.