The vehicle became the subject of an investigation after testimony in July 2020 by Charl le Roux — an electrician who did work for Bosasa and Mokonyane — who spotted the vehicle inside a garage. It had been covered with a special cover.

The testimony followed that of Bosasa’s former COO, Angelo Agrizzi, who led evidence that Mokonyane received monthly payments from the company.

An investigation by the commission found that a deposit of R2.2m was paid towards Mokonyane’s car.

Evidence leader Viwe Notshe SC questioned Mokonyane’s ability to afford the car, as her then salary could not cover it.

“My husband had been doing some work. He had ventured into a very closed sector of business. He had people who were mentoring and supporting him, and they could see it was a good business which had a chance of growing ...” Mokonyane said during testimony on Thursday. 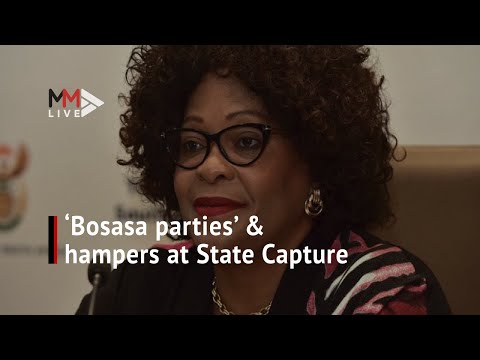 She said she and her husband met with two family friends, one identified as Thaba Mofumadi, who agreed to pay the deposit for the car.

“He [her husband] then made arrangement with the friends, who are not doing business with the government, and they were able to make this assistance. In return, they were going to be part of his partnership on the work of the Eskom contract. That’s how the deposit was made,” she told the commission.

Mokonyane said she, however, felt the need to contribute towards the vehicle because “I have my own pride”.

The commission revealed she paid just over R20,000 in monthly instalments and almost R900,000 in total.

She said there had been nothing untoward with the gesture of the friends.

“We are a family that has got friends who understood our pain of always being deprived of opportunities.

“It was a business arrangement to say, 'Look, we want to enter the space and you are into it and I am being taken from pillar to post to get into [it].' They said, 'Look, we are going to assist you because you have this bid that you have made'," said Mokonyane.

Asked if the arrangement was contained in a document, Mokonyane stuttered and argued it would have been between the trio.

Notshe questioned if the arrangement was a loan or not.

“My take is that if we get through that Eskom deal, finally, surely, they will be invited to be a part of it. We will have to pay him back if this thing does not go anywhere,” responded Mokonyane.

While Mokonyane's appearance at the commission was expected to be around her relationship with Bosasa, she questioned what sparked the “curiosity” of the commission.

“You will remember Mr Agrizzi said you were paid sums of money cash by Gavin Watson, and now you have a car which is more than R3m and there’s a deposit of R2m. We needed to investigate where you got the money from,” argued Notshe.

The commission will resume its public hearings on Friday.