By BOBBY JORDAN AND Bobby Jordan 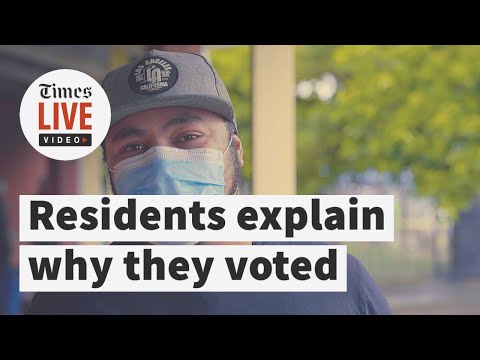 Voters braved driving rain to turn up in dripping numbers at polling stations in Cape Town’s “deep south” on Monday.

In Muizenberg, surfers in wetsuits jogged past a queue of sodden voters flanking the beachfront polling station, while in Kalk Bay voters snaking towards the community centre took refuge in the coffee-scented Dalebrook Café next-door.

Party representatives outside polling stations in Muizenberg and Fish Hoek expressed frustration about the slow processing of voters.

Image: Bobby Jordan Umbrellas and raincoats helped voters keep their spirits up in the queue outside the Fish Hoek Library polling station.

“There have been some basic glitches. It’s a lack of experience,” said Kuhl, who was sheltering inside a DA campaign kiosk.

Kuhl said she expected a DA landside in ward 64, a sentiment shared by long-time ANC party agent Paul Davids, who faced the weather in a padded jacket.

“I remember Jannie Momberg [former ANC MP] saying, ‘Paul, you will never change the voters in Fish Hoek’,” Davids said with a sigh.

“It’s a sad thing because it shows Fish Hoek hasn’t joined the nation.”

Image: Bobby Jordan Muizenberg DA stalwart Robin Carlisle said the surf, rather than the weather, was a threat to voter turnout.

Not so, according to Robin Carlisle, 80, DA campaign manager in Muizenberg and former Western Cape transport and public works MEC.

Carlisle said only a significant swing away from the ANC could save the country from terminal ineptitude.

“People sense there needs to be a big change,” he said, adding that Electoral Commission (IEC) officials had refused to let his party agents use the toilets at the Muizenberg Pavilion polling station.

A new automated voter list processing system had slowed the queue, he said, with voters huddled in the lee of the Pavilion wall to avoid lashing rain.

Carlisle said he was heartened the bad weather had not deterred voters. Of more concern was the impressive surf.

“Apparently the surf is quite good. The water is black with surfers, but I hope they’ll come to vote later.”