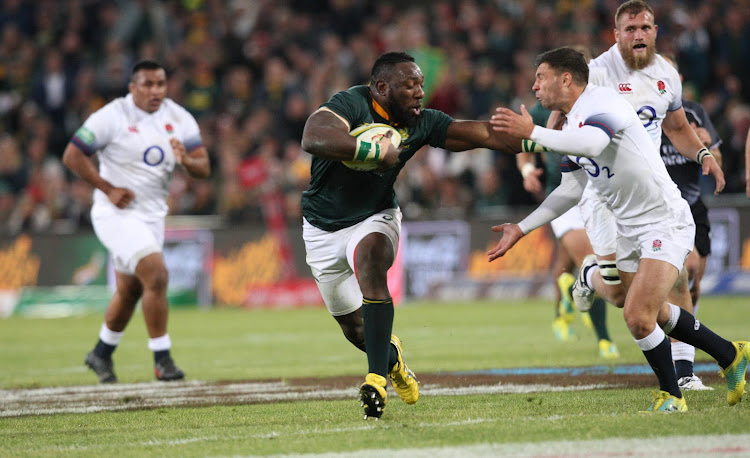 Beast Mtawarira of the Springboks playing his 100th test match makes his way pat an England player during the second incoming series test at the Toyota Stadium in Bloemfontein.
Image: Masi Losi

Tendai Mtawarira was active for just 45 minutes in his 100th test before he was withdrawn from battle and it mattered little. The Boks, frankly, had 22 other beasts lined up, willing and able to rip into England.

They clinched the series in this, at times, brutal test match and will travel to Cape Town with the luxury of spreading game time in their wider group.

In a match of thunderous tackles, tetchiness crept in but boiling point was thankfully avoided.

Again the Boks had to summon courage and resilience after another lethargic start. They marginally bossed the collisions and England, although full of enterprise, were running on empty towards the end.

Mtawarira’s departure seemed a little premature but Bok coach Rassie Erasmus will, for now, employ a revolving door policy in deploying his personnel.

Again it was the experience the Boks gained from abroad that proved crucial. No8 Duane Vermeulen ran at and into the English with little regard for life or limb.

Despite being in their crosshairs, scrumhalf Faf de Klerk again posed uncomfortable questions of the England defence.

Hooker Bongi Mbonambi, centre Damian de Allende and Pieter-Steph du Toit too made an impact when they collided with the tourists, while Handre Pollard has brought consistency at flyhalf.

Props Steven Kitshoff and Thomas du Toit came on for Mtawarira and Frans Malherbe respectively and their impact was immediately felt. A penalty try underlined a period of post halftime dominance.

England who were supposed to be buoyed by the return of Joe Launchbury and the maiden introduction to the starting team of Brad Shields, again came unstuck in the second period.

Poor discipline again cost them and this time Nathan Hughes’ banishment left them short at the end.

There were fireworks before the match and things got a little heatred by the end of the first quarter, when both sets of forwards came to grips with each marginally outside of what is legally permissible. There was a lot of grabbing and pulling but nothing that required sanction.

The tension however remained palpable and things almost boiled over on the half hour mark after another bout of enthusiastic shoving mainly between Vermeulen and Maro Itoje.

Itoje cut a towering figure at the front of the lineout, but the loss of Billy Vunipola cost England.

Although they won the series the Boks have some revision.

It took them a while to wise up to the intentions of the England attack last week, and again surprisingly left their periphery unattended early on, on Saturday.

The hosts’ defensive frailties were exposed when England hit left and created a simple overlap that enabled Mike Brown to score in the 10th minute.

Barely two minutes later his wingman Jonny May made the most of the space he was afforded but he evaded S’Busiso Nkosi’s feeble tackle to score in the other corner.

It wasn’t so much the missed tackles that cost the Boks but the vast swathes of unmanned territory they allowed England to venture into.

By halftime, exactly halfway through the three-test series, the visitors had scored six tries by making headway up the flanks.

As was the case in the first test, the Boks eventually plugged those holes and it also helped that they had more of the ball as the half progressed.

The Boks squandered several opportunities to register points as the first quarter closed. Unlike England though, when they built a head of steam, they did so taking the direct route.

It took a Herculean effort first from Mtawarira to make initial breach and then Duane Vermeulen who was drawn by the magnetism of the tryline.

Two Pollard penalties, the second two minutes from the break, got the Boks in front by a point. The Boks never looked back.