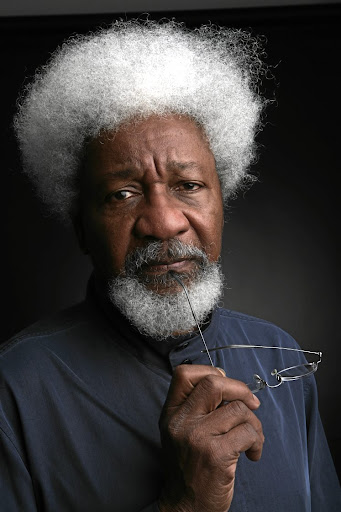 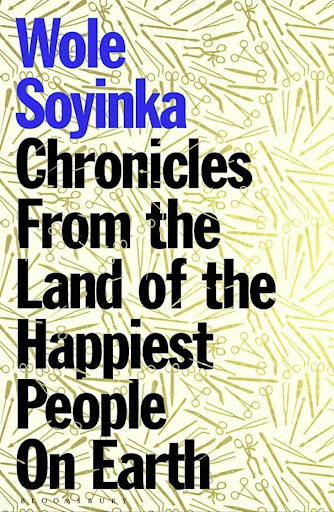 Chronicles From the Land of the Happiest People On Earth ★★★★★
Wole Soyinka
Bloomsbury Circus, R350

Shyster priests, colonialists with a false sense of grandeur, rapacious politicians, lavish events, the omnipresent threat of Boko Haram - all within the first few pages of Wole Soyinka's new novel, his first in nearly 50 years. The Nobel laureate has conjured up a country sadly plagued by corruption, abuse of authority and violence.

Set in an alternate contemporary Nigeria, designated as one of the five happiest nations on Earth ("I gasped when I read that!" Soyinka exclaims in our Zoom interview), Chronicles From the Land of the Happiest People On Earth's central storyline follows a swindler stealing body parts for ritualistic purposes from the hospital of the character who represents the moral compass of the novel, Dr Kighare Menka.

It soon becomes apparent that there's something rotten in the state of this West African country: Dr Menka's close friend and confidante, Duyole Pitan-Payne - an "engineer and business entrepreneur, a compulsive glutton for 'inside stuffing'" - has been offered a position at the UN in New York, yet someone seems hellbent on ensuring that he doesn't leave Nigeria ...

The press release, unsurprisingly, describes the book as a whodunnit. What are Soyinka's thoughts on this designation?

"I was very happy when I saw that expression!" he cheerfully exclaims from his study. "Finally I had achieved a lifelong ambition of writing a detective story."

Yes, admits the politically conscious poet, playwright, novelist, essayist and memoirist, he always had "a secret longing to write a detective novel". Soyinka says he "lapped up" detective stories as a child, enjoying the elements of mystery, investigation, the piecing together of bits and pieces, and "coming up with some kind of surprise".

He adds that he didn't begin by writing a detective story but noticed the opportunity of injecting an element of history, which fulfilled his "secret aspiration".

Soyinka sketches a Nigeria dissimilar to the one he knew as a child, sombrely describing the regression of his home country as "very depressing" and "very different to my experience of growing up".

His characters were shaped by "certain features which define someone in one's environment", he says, citing community, a nation and the physical environment as said features. "In this particular case, my obsession with the dramatic, schizophrenic nature of my society. I consciously imbued the characters with those features."

"Positive", "repulsive", "manipulative", and "cynical" are the descriptors which follow.

"Idealistic, of course, in the case of Dr Menka, who represents a familiar feature of Nigerian humanity: somebody who comes from a disadvantaged environment, has ambition, a sense of emulation, a certain position, and becomes almost a kind of role model - who has flaws here and there," says Soyinka.

In his characters he "deliberately created surrogates of his environment and society", which he describes as "degraded; it's lost, an environment in which the humanity is being repressed by everything. It's like the negative has managed to acquire a voice and dominate what is positive."

The scourge of corruption is one of the factors that propelled him to write his first novel since 1972's Season of Anomy. Rather than diminishing this negativity, allowing it to accumulate and overwhelm one's instincts, he opted to devise a creative translation of such events, Soyinka says. He also overtly draws on Boko Haram in the novel to illustrate the trauma the "psychopathic warriors of fundamentalist Islam" cause Nigeria's youth.

"They read about what's happening to people of their age; their sense of insecurity shows in their relationship with others, it affects their scholastic abilities. At the back of their minds there is fear. Real fear."

Soyinka sighs heavily, before adding that contemporary Nigeria is afflicted with dehumanisation, ritual killings and casual abductions. He draws on his satirical plays, describing the priests he wrote about as having "a funny side", being "charlatans" and "actually loveable rogues".

"What's been happening since those satiric sketches is that it's become a daily occurrence, and such a medium [theatre] no longer gives you a sense of relief, but a sense of becoming inadequate," Soyinka says, adding that his subconscious preyed on him until he knew that writing a novel had to be his next means of addressing these issues. "Or maybe I just thought it was time to go back to this medium."

A long-form work of fiction also offered him the opportunity to introduce the reader to characters who go by various monikers. (The quack priest Papa Davina/Teribogo/Papa D deserves an honourable mention.) Coming up with names, including nicknames, "betrays you in a sense that you really couldn't alight on a name that absolutely satisfies you", Soyinka says. The plentiful sobriquets attached to the characters are "also true in a society where people have up to five names".

One such nickname that elicited a chuckle was that of Chief Modu Udensi Oromotaya, a wealthy and powerful media mogul, whose given name "was adjusted to read Ubenzy, an ingestion of the Benz in Mercedes-Benz, the status symbol after independence, before the motor car was displaced by the private jet".

"That one was inevitable!" Soyinka chortles, saying that Ubenzy was based on a real character, and a "loveable" character at that.

Commenting on the tangible, autonomous remnant of colonialism, embodied by the character of Sir Godfrey Danfere (or "Sir Goddie"), British nationalist and prime minister of Nigeria, Soyinka says he was influenced by the colonial aristocrats who "even until today, are completely imbedded and shaped by colonial manners". These "very shallow people" often belong to the upper crust of society, and their understanding of nobility, mind, and lifestyle is a "superficial extract they have from their colonial contacts".

How did lockdown affect your writing?

“Lockdown counted in my favour. Out of evil comes something positive, sometimes.” Soyinka, who spent a fair amount of lockdown in seaside cottages in Senegal and Ghana, describes the beach breaks as offering him time to “sink my teeth into the narrative. It gives you the opportunity to be by yourself and your characters.”

What does happiness mean to you?

“I can’t think I’ve ever been aware of the happiest moment of my life. Saddest? Yes. Unhappiest? Yes. Frustrated? Yes. Enraged? Yes, even ready to kill in that moment. I think I want to celebrate something? Yes.” Soyinka describes talking about happiness as difficult. “I see happiness in others. A happy person, usually someone like Duyole, is someone who extracts happiness out of anything and that’s why I put the character in — not to keep the novel too bleak. Seeing somebody who has an internal satisfaction that he wants to share, that’s the kind of person I find a happy person.”

The 87-year-old Akinwande Oluwole Babatunde Soyinka was born on July 131934 in Abeokuta, Nigeria. He lives in a secluded home in Abeokuta surrounded by both arboreal flora and avian fauna (the background melody of animated birdsong during our interview attests to the latter).

AWARDS AND OTHER WORKS

Soyinka was awarded the Nobel Prize in Literature in 1986, making him the first Sub-Saharan African author to be honoured with this accolade. Other notable awards include (twice) receiving the Anisfield-Wolf Book Award, the Agip Prize for Literature, the Royal Society of Literature’s Benson Medal, the Golden Plate Award of the American Academy of Achievement, and the International Humanist Award.

Soyinka famously declared he would destroy his green card (describing it as a “Wolexit ”) if Donald Trump were to be elected president of the US, which he promptly did. Take that, Trump.

WHAT THE CRITICS HAVE TO SAYABOUT SOYINKA’S NEW BOOK

Chronicles is a vivid and wild romp through a political landscape riddled with corruption and opportunism and a spiritual landscape riddled with fraudulence and, even more disquietingly, state-sanctioned murder. This is a novel written at the end of an artist ’s tether. It has gone beyond satire. It is a vast danse macabre. It is the work of an artist who finally has found the time and the space to unleash a tale about all that is rotten in the state of Nigeria. No one else can write such a book and get away with it and still live and function in the very belly of the horrors revealed. Ben Okri, The Guardian

With caustic wit, Soyinka’s carnivalesque depictions of venality ferret out hypocrisy from behind its elaborate guises and condemn crimes that challenge “the collective notion of soul”. Briefly Noted Book Reviews, The New Yorker

Soyinka the activist does seem to keep providing Soyinka the writer with material. Chronicles' careering plot twists, spirited cast of characters and sinister themes — a corporation that sells human body parts, a false prophet who uses elements from different religions to suit his purposes — might seem unlikely, but they are less so for someone in an intimate relationship with Nigeria. Intimate, and stormy. Ruth Maclean, The New York Times