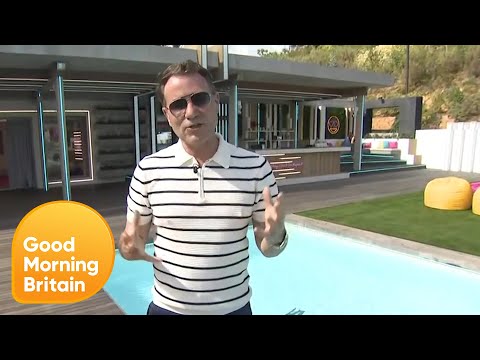 British TV viewers have had their first glimpse of the Cape Town villa where 12 young men and women will cavort for the next two months in pursuit of a R1m prize.

Viewers of the ITV breakfast show Good Morning Britain were given a brief tour of the Constantia mansion on Thursday, three days before 80 cameras begin recording the first winter series of Love Island.

Mail Online reported that the mansion’s location is “a staunch secret to protect the staff and contestants in the city where the murder rate has risen by 30% in six years”.

But in December the Sunday Times revealed that the villa is one of two on a 15,300m² estate owned by a hedge fund and mining tycoon. It is on the market for R100m.

The Midden Cottage, with sweeping views over the vineyards of the Constantia valley, has been festooned with beanbags and fairy lights as part of a makeover to prepare it for the Love Island.

For the past five years, the dating show has been broadcast annually in the European summer from a villa on the Spanish island of Majorca.

Image: ITV The Dog House will be the destiny of 'Islanders' who misbehave.

During his live broadcast from Constantia, Richard Arnold introduced viewers to a new feature in the villa, the “Dog House”, a pull-down bed where contestants — known as Islanders — can be sent by their partners if they misbehave.

Talking to studio host Kate Garraway, he said: “Isn’t it spectacular, Kate? I have to say this is an extraordinary property. This is my first look as well ... There is something for everyone.”

Image: ITV 'Love Island' producers will be hoping the double shower is put to frequent use.

Features include two hot tubs, separate dressing rooms for men and women, an outdoor kitchen, a double shower and a giant spa bath.

Image: ITV There'll be plenty of heated arguments around the firepit.

Contestants will gather around the fire pit as they make huge decisions about who they want to “recouple” with.

Image: ITV Daybeds have been introduced in The Midden Cottage's spectacular garden pavilion.

The colour scheme is dazzling, with vibrant oranges, yellows, blues, and pinks complementing neon signs scattered around the house.

Image: ITV The Hideaway is where couples can retreat for private encounters.

The Hideaway gives couples the chance to indulge in private passion, and has a secret cabinet full of champagne as well as an outdoor shower and hot tub.

Image: ITV The presence of seven double beds has led to tabloid speculation.

The bedroom has seven double beds, leading British tabloids — which are universally obsessed with the series — to speculate about the possible “shock” introduction of additional contestants.

The Sunday Times reported that The Midden Cottage has a 1,600m² footprint with four bedrooms and five bathrooms, but has been extensively renovated to accommodate the Love Island contestants.

Image: ITV The six men and six women who will be moving into The Midden Cottage in pursuit of a R1m prize.

According to City of Cape Town records, the owner of the site is Italian tycoon Luca Bechis, 50, who made his fortune in hedge funds and now has interests in mines in Kenya and Mozambique, including one that holds the world’s largest deposit of vermiculite.

Image: ITV The pool at The Midden Cottage.

The Midden estate is nestled among Cape Town’s ultra-wealthy, flanked by wine estates on the slopes of the Vlakkenberg where owners include Stephanie Getty-Waibel and Cecile du Preez, both granddaughters of US oil baron Jean Paul Getty, once considered the world’s wealthiest man.

The Midden’s immediate neighbour is Constantia Mist, owned by property developer John Schooling, which is being used as a logistics centre for the filming.

Love Island recruits men and women in their early 20s to live in isolation under permanent video surveillance. The aim is for contestants to find their ideal match and avoid being eliminated by other contestants, or via public vote.

The show is structured to facilitate steamy couplings, with a special tryst area where several memorable moments have occurred in the first five series.