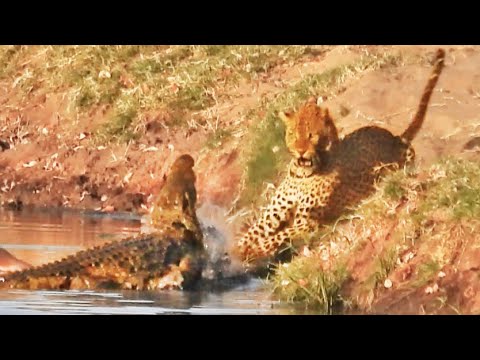 In the bush animals often try to steal food from others, but this crocodile was having none of it.

This sighting was captured by Alberto Scattolin, owner and guide at Matimba Lodge.

Scattolin told LatestSightings.com he arrived at this waterhole in the Kruger National Park and spotted a crocodile feasting on a carcass in the water.

“But out of nowhere, a leopard appeared and spotted the potential free meal. He immediately started approaching the water where the crocodile was.

“I stayed and watched as the hungry leopard tried to take the meal from the croc repeatedly. The croc had none of it though and protected the meal by lashing out at the leopard with snapping jaws each time it came close enough to almost become a meal itself.”