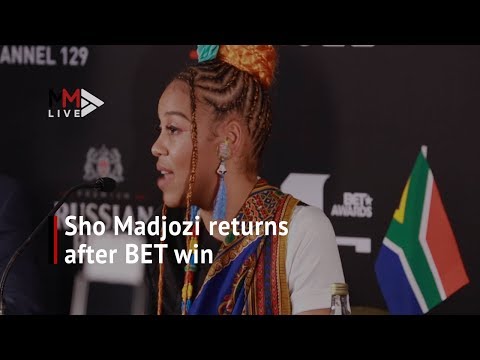 Sho Madjozi made Mzansi proud when she bagged the prestigious BET award in the category of best international act recently, so Mzansi showed up at the airport to give her the welcome she deserves after flying the SA flag high in the States.

The rapper, who has popularised rapping in xiTsonga and has stayed true to her Africanicity even after making it big on mainstream levels, landed back home on Monday to an airport filled with her supporters.

BET Africa posted several videos on their Instagram showing the excitement of Sho's fans who waited for her at the airport for more than two hours.

There were a lot of women dressed in their colourful traditional Tsonga regalia such as xibelani while many other fans donned colourful braids and hairpieces made popular by Sho.

The Huku superstar made history as the first female South African artist to win a BET award.

In her acceptance speech, Sho said the win proved that anyone can be a superstar, even a girl from a village in Limpopo.

"My story is testament that you can come from any village, in any forgotten part of the world, and still be a superstar. For girls that come from where I am from, which is Limpopo, I just want to say that you don't need to change who you are, you can still be big," an emotional Sho said.