Image: Nonkululeko Njilo Community members marched to court to vent their anger over the brutal murder of Naledi Lethoba.

A 19-year-old student accused of  brutally killing his girlfriend Naledi Lethoba changed his mind about applying for bail on Friday.

Obed Leshoro appeared fleetingly in the Welkom Magistrate's Court, dressed in a brown bomber jacket. Unable to maintain a straight posture, he looked down and could not contain the tears pouring down his face.

Lethoba, 21, was found dead in an open field last month in Welkom. The gruesome nature of her killing shocked the town. Her breasts had been cut off and a knife was found protruding from her neck. Parts of her body had been burnt.

Leshore was arrested after being handed over by his parents, soon after her body was found.

He was going to make a formal bail application on Friday but his attorney said this was no longer the case. 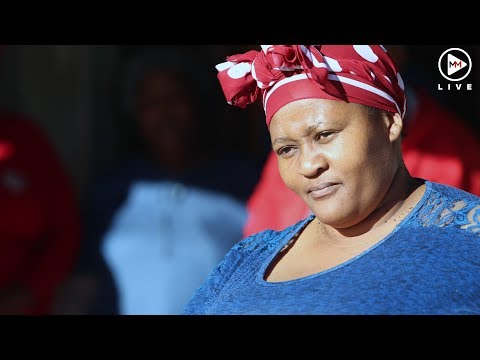 Prosecutor Hilmary Donen said the matter was postponed to July 12 for further investigations. Leshoro will remain in custody.

Scores of people marched to the court to call for the accused not to be given bail.

"No bail for women abusers," read one of their placards. "Respect the rights of the families of gender-based violence victims" and "harsher sentences for abusers" read others.

Lethoba's aunt Sebina Lethoba said the family was disappointed to have missed the brief court appearance.

"We were just outside, they should have waited for us, but we are relieved that the perpetrator will remain behind bars," she said.

"We are already heartbroken. Bail was going to make things worse. His arrest won't bring our child back but I think we will sleep better knowing that he is serving his time," she said.

Lethoba’s friend Portia Nakane was relieved about the bail decision.

"He knows that if he was released, hell would break loose. Enough is enough," she said outside court.