He died on Wednesday afternoon at Mulbarton Hospital in Alberton, his daughter Zozo confirmed to SowetanLIVE 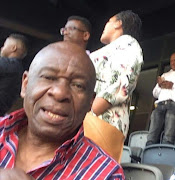 In a decades-long career which started in the 1970s, Mazibuko worked for several newspapers including The World, Sunday Times and Sunday World.

A passionate speaker, as with his writing, Mazibuko was also known as Mshikashika by his colleagues.

He started getting sick on Sunday.

“He became serious on Tuesday, that is why today (Wednesday) we decided to take him to hospital because he was getting worse. He was taken to hospital in an ambulance and he was still speaking. He died just when doctors were starting to attend to him.

“Everything just failed. I will always remember my father for being a sweet father and lovely husband to my mother. He loved his family dearly,” Zozo said.

Those who worked closely with him defined Mazibuko as a serious wordsmith. He was also known for his unique sense of humour.

Mazibuko started his journalism journey in the mid-70s, writing for a magazine called Sharp Shoot. He then worked for The World and Soweto News before joining Sunday Times. His last stop was at Sunday World where he worked until his retirement a few years ago.

“When he worked for Sunday Times he really showed his class and the talent he has for writing. I remember that Louis never arrived on time for any live match but when you read his report it will be on point and I still don't how.”

“Figo wrote about many soccer bosses before they became administrators. He also wrote about big stars such as Ace Ntsolengoe, Jomo Sono and Kaizer Motaung in their soccer playing years. He was passionate about soccer and he contributed to the development of soccer in this country.”