‘It could have ended badly’: How 2.2m black mamba was captured in teen’s bedroom 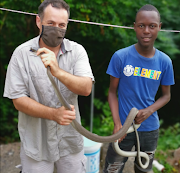 Image: Facebook/Nick Evans Snake rescuer Nick Evans attended to a call from a teen who spotted a black mamba in his bedroom.

Durban based snake rescuer Nick Evans says a call made by a teenager saved the child’s life and that of a 2.2m black mamba.

Evans captured the snake on Friday.

He said while mambas prefer to hide rather than attack, the incident could have ended badly for both.

In a Facebook post, Evans said he received a call from the teen based in Welbedacht, Chatsworth, after he spotted the snake entering his bedroom as he was about to take a nap.

Evans said the room was big and divided by a wardrobe with a bed on each side. He searched for the snake under the first bed before moving to the teen’s bed. He said the search proved to be difficult as his bed was cluttered.

The caller and I with the mamba

How he captured the snake

Evans said his first attempt to catch the snake was not a  success as it slithered to the next bed.

The young man and his friend were standing on a couch and saw it come out the other side of the wardrobe.

“It was now under the bed next door. I rushed around to grab it, but it was too quick for me and bolted back to the other side,” wrote Evans.

“It then tried to hide in a small gap between the wardrobe and a wall, and this is where I managed to capture it. I stood on the bed, and pulled the head-end out with my tongs, pinning it down quickly.”

Evans said the residents are likely to spot another snake as their property is surrounded by thick bushes.