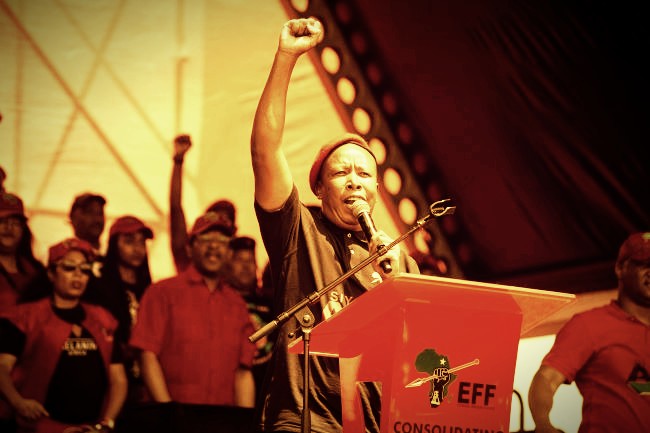 Shane Warne is arguably the best leg spinner the last century or so has produced. He used a metaphor to intimidate his opponents without fail. Once he called a batsman his “bunny”, the middle order would be hell for anyone less talented than AB de Villiers.

White Afrikaners are EFF leader Julius Malema’s bunnies. The more they fixate on his populism, the more they retreat into the laager that confirms every stereotype black South Africans have of racism and systemic privilege.

Malema brings out the worst in Afrikaners. It is simply not possible to have a conversation with white South Africans about any topic from apartheid to the fertility of a mustard seed without Malema’s name cropping up.

Malema represents the stereotype of whites’ Africa pessimism. I must have made over a thousand speeches at business chambers and farmers, and if you want to completely lose your audience you should mention Malema in your opening paragraphs.

I believe executive committee members of the Transvaal Agricultural Union or the FF Plus could get elected for a fourth term merely by cursing Malema before they have even confirmed a quorum.

There is little doubt that Malema thought he could buy organised labour’s loyalty on the back of Marikana. When that turned out to be a pipe dream, he tested his party’s traction in informal settlements and townships, but both these support bases stayed relatively loyal to the ANC.

Next, the EFF tried populism as a means of political mobilisation. After the latest election results, we know that black South Africans can be whipped into a political sulk and even into criminal behaviour (in the July unrest), but they do not vote on the back of race mobilisation or emotive incitement over land grabs.

Even the ANC now realises that the EFF is no threat and makes a point of offending the red berets. With the recent coalition negotiations, Luthuli House sent a few lightweights to the meeting with Malema — a clear sign that Ramaphosa’s people are not really interested in difficult conversations with the EFF.

On the wisdom of Herman Mashaba’s recommendation, Malema then forced the DA into uncodified agreements.

The EFF is a 10% party, to a large extent dependent on a black middle class grappling with white corporate smugness in the private sector or a lower middle class excluded from the former liberation movement’s networks of patronage.

There is an intellectual sub-discipline of academic activists at universities that makes thousands of students EFF members, but they are not registered and their involvement with the EFF is therefore, at most, theoretical.

It’s not as if the EFF doesn’t know this. Malema and Floyd Shivambu struggle to get the money to make registration days count and can’t get voters with food and transport to voting stations.

The problem is that historically white parties use the Malema phenomenon to mobilise their own support bases. In a healthy democracy, party leaders would try to steal each others’ support bases with excellent policy proposals. But the DA and FF Plus threaten white South Africans not only with EFF and ANC leaders, but also with individual identities of the parties’ supporters.

ANC members and voters are cadres, corrupt and dependent on grants. The prototype EFF member is a bank robber, communist and violent individual who wants to use politics to steal your property.

Afrikaners scare easily and, in this case, it is a fear of their own shadow.

THE WEEK IN POLITICS | Max du Preez looks at the drama around the election of a mayor for eThekwini and the architecture of the RET structures behind it.

ROLL OUT THE BARRELS | The SAPS was all over the Durban port precinct this week when two containers full of “weapons” were found. Erika Gibson sheds light on what was found in the end.

FREE TO READ — PROSTATE PROTECTION | A revolutionary non-surgical procedure that can resolve an everyday prostate issue has been successfully done in SA. We look at where this surgery fits into the bigger picture.

WE NEED THINKERS | Teaching religion in schools could lead to children not asking pressing questions about and accepting whatever they are taught about religion. Children should learn to be critical thinkers.

HAPPY BLACK FRIDAY | Subscribe now and pay only R30 per month for the first three months of a standard monthly subscription.

News, analysis and interviews in this week's Vrye Weekblad.
News
3 weeks ago

Politics is about power, plus five talking points from ‘Vrye Weekblad’

A clear message to the ANC, plus five talking points from ‘Vrye Weekblad’

The comprehensive stay-away vote and fragmentation of the ANC are symptoms of ordinary South Africans’ deep distrust of the political system, writes ...
News
4 weeks ago